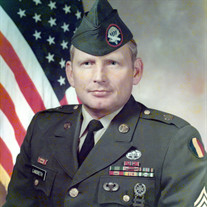 Jesse was born October 24, 1940 in Duke, Missouri, the third child of Junior and Edith Landreth. Jesse was saved as a young boy at Idumea Baptist Church in Laquey, Missouri and rededicated his life in 2014 becoming a member of Grace Baptist Church in Richland. Jesse joined the Army in 1958 at the age of 17 and served for 26 years with the 82nd and 101st Airborne Division as a combat medic. He met his wife Gudrun of 51 years while stationed in Schweinfurt, Germany and has two children Randy Landreth and Angela Landreth both of Richland, MO, two grandchildren, Adrian Landreth and Morgan Landreth of Wisconsin, sisters, Wanda “MO” Brown of Richland, MO and Rhonda Friend of Prescott, AR, brothers, Gary Landreth and Rick Landreth both of Richland, MO. Jesse served two tours in Vietnam and the Dominican Republic as a combat medic where he received numerous medals and commendations for bravery and saved the lives of many of our fighting soldiers. After retiring from the Army as 1SGT, Jesse served and helped others as a Paramedic for Pulaski County Ambulance for another 18 years. His passions were hunting, fishing, guns and working outdoors whether it be in his yard, garden, or putting up 10 acres of fence line. He was a lifelong member of the NRA and supported St. Jude’s Children’s Hospital. Jesse was preceded in death by his older infant brother Billy Jean, his Mother Edith and Father Junior Landreth. Jesse will be missed and always loved by his Family, many Friends and will always be a true hero. Services were held at 2:00 p.m., Friday, January 23, 2015 at Grace Baptist Church of Richland, Missouri, with Bro. Fred Bobe officiating. Angela Landreth read a poem honoring her father. Favorite music selections included “Amazing Grace” – Judy Collins, “In the Garden” - Jim Reeves and “I Can Only Imagine” – Mercy Me. Serving as escorts were the United States Army. Burial with Military Honors followed in the Missouri Veterans Cemetery, Ft. Leonard Wood, Missouri. Services were under the direction of Memorial Chapel of Richland. Memorial contributions may be made in memory of 1SGT (ret) Jesse Darrell Landreth to the St. Jude Children’s Research Hospital, and may be left at the funeral home. Stand At Ease Soldier…Your Fight Is Over Online condolences may be left at www.memorialchapelsandcrematory.com

Jesse was born October 24, 1940 in Duke, Missouri, the third child of Junior and Edith Landreth. Jesse was saved as a young boy at Idumea Baptist Church in Laquey, Missouri and rededicated his life in 2014 becoming a member of Grace Baptist... View Obituary & Service Information

The family of 1SGT (Ret) Jesse Darrell Landreth created this Life Tributes page to make it easy to share your memories.