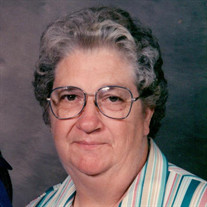 Agnes Marie Thiltgen, daughter of the late Herman Seiler and Caroline (Houselog) Seiler, was born July 28, 1929 in Zwingle, Iowa. She grew up and worked the family farm along with her father, mother, and her brothers and sisters. She attended school at the Franklin School in Zwingle, Iowa. On November 18, 1948 in LaMotte, Iowa, Agnes was united in marriage to Harry Anthony Thiltgen. They were blessed with seven children and remained in Iowa until 1963 when the family moved to the Newburg, Missouri area. Agnes and Harry operated the Onyx Mountain Caverns for several years. Agnes was a devoted mother, who spent her life caring for her children, and grandchildren at the family home. She enjoyed preparing meals grown from the family garden, as well as baking many delightful deserts. Agnes was known by her family, friends, and other visitors to the home, as a person who loved all children. In her spare time, she enjoyed going to flea markets to set up and sell items as well as to search for the perfect cookie jar or salt and pepper shakers to add to her collection. Agnes was a devoted Catholic, who was a long time member of St. Robert Bellarmine Catholic Church. She was a member of the Pulaski County Historical Society and she also volunteered for Good Samaritans Resource Center to help needy families. Agnes passed away Tuesday, January 10, 2017 while at the Rolla Manor Care Center of Rolla, Missouri having attained the age of eighty-seven years. She will be sadly missed, but fondly remembered by all those that knew and loved her. Agnes leaves to cherish her memory, her seven children: Margie Perney (William) of Newburg, MO, Eugene Thiltgen (Claudine) of Dixon, MO, Wayne Thiltgen of Claremore, OK, Marilyn Miller (Lonnie) of Newburg, MO, Dale Thiltgen (Pat) of Waynesville, MO, Carol Coward of Newburg, MO and Mark Thiltgen (Brenda) of Newburg, MO; twelve grandchildren; seventeen great grandchildren; one great-great granddaughter; one brother: Harvey Seiler of LaMotte, IA; three sisters: Edith Decker of Dubuque, IA, Mary Decker of Sherrill, IA and Betty Barth (Jim) of Dubuque, IA; numerous nieces, nephews, other relatives and friends. In addition to her parents and husband, Agnes was preceded in death by three sisters: Anna, Ada, and Clara; and two brothers: Carl and Joseph. Services were held at 11:00 a.m. Tuesday, January 17, 2017 in the St. Robert Bellarmine Catholic Church of St. Robert, Missouri with Father John Groner officiating. Serving as lectors were Joann Rosipal and Chuck Kremer. Assisting Father Groner were Charlotte Voudrie and Betty Rabbit. Music was provided by organist Evelyn Horine and soloist Mike Beattie. Serving as escorts were Andrew Armstrong, Kyle Thiltgen, Bryan Coward, Chris Thiltgen, Paul Kremer and Anthony Thiltgen. Serving as honorary escorts were Chris, Edward, David and Frank Kremer. Burial followed in the Resurrection Cemetery of St. Robert, Missouri. Services were under the direction of Memorial Chapels and Crematory of Waynesville / St. Robert.

Agnes Marie Thiltgen, daughter of the late Herman Seiler and Caroline (Houselog) Seiler, was born July 28, 1929 in Zwingle, Iowa. She grew up and worked the family farm along with her father, mother, and her brothers and sisters. She attended... View Obituary & Service Information

The family of Agnes Marie Thiltgen created this Life Tributes page to make it easy to share your memories.

Agnes Marie Thiltgen, daughter of the late Herman Seiler and...