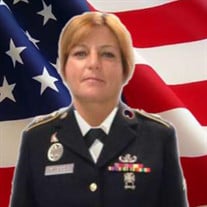 SGT Aimee Alleene Filbeck, daughter of John G. Peeler and Cindy Chaney, was born March 30, 1977 in Memphis, Tennessee. She passed away Monday, June 20, 2016 in her home on Fort Leonard Wood, Missouri having attained the age of 39 years. SGT Filbeck graduated from North Little Rock High School. In 1995, she moved to Branson, Missouri where she began working as a contract hotel manager and also served on the Lodging Association Board of Directors for many years. On October 4, 2000, SGT Filbeck was united in marriage to Donald R. Filbeck, Jr. in Harrison, Arkansas. They shared over 15 years of marriage together and many wonderful memories. In 2009, SGT Filbeck entered the United States Army and served her country faithfully. She was 1st in everything and earned several awards and commendations. SGT Filbeck was stationed at Fort Leonard Wood, Missouri. In her spare time, SGT Filbeck enjoyed watching television with Don and vacationing together. She enjoyed going to the beach and also the shooting range. Most importantly, she loved her family and enjoyed spending time with them. SGT Filbeck will be sadly missed, but fondly remembered by all those that knew and loved her. She leaves to cherish her memory, her husband: Don Filbeck of the home; her father: John G. Peeler and wife Angelee of North Little Rock, AR; her mother: Cindy Chaney and husband Hubert of Hensley, AR; two children: Faith McCoy of Branson, MO and Donald R. Filbeck III of the home; one grandson: Emery Weber of Branson, MO; one sister: Maria Atwater of North Little Rock, AR; one brother: Chris Peeler of Bricky, AR; sister-in-law: Cheryl Brice of Branson, MO; other relatives and friends. Visitation was held from 4:00 - 6:00 p.m., Monday, June 27, 2016 in the Memorial Chapels and Crematory of Waynesville / St. Robert. Visitation was held from 1:00 p.m. with a service with full military honors at 2:00 p.m., Tuesday, June 28, 2016 in the Mansion Theatre, 187 Expressway Lane of Branson, MO. Arrangements are under the direction of Memorial Chapels and Crematory of Waynesville / St. Robert. Memorial contributions may be made in memory of SGT Filbeck and may be sent to Memorial Chapels and Crematory of Waynesville / St. Robert, 202 Historic 66 West, Waynesville, Missouri 65583.

The family of SGT Aimee Alleene Filbeck created this Life Tributes page to make it easy to share your memories.