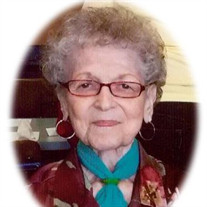 Alberta “Bertie” Christine (Decker) Egan, daughter of the late Albert and Emma (Williams) Decker, was born October 26, 1934 in Waynesville, Missouri where she grew up and graduated from Waynesville High School with the Class of 1951. On May 23, 1955, Bertie was united in marriage to Melford Egan in Miami, Oklahoma. They shared over 45 years of marriage together and were blessed with three children: Milford Jr., Charles and Kristi. Melford preceded her in death in 2001. In 1956, Bertie and Melford began their own business, Bel Air Mobile Home Park. Bertie continued operating the business even after the passing of Melford and did so until 2006 after 50 years. In her spare time, Bertie enjoyed playing cards, “a real winner”. She also liked to knit and spending time with her two dogs. Everyone in the area knew her as a great cook. She enjoyed cooking for family gatherings and spending time with her children and grandchildren. Bertie passed away Tuesday, November 7, 2017 in her home having attained the age of 83 years and 12 days. She will be sadly missed, but fondly remembered by all those that knew and loved her. She leaves to cherish her memory, her son: Charles Egan of St. Robert, MO; three grandchildren: Alicia Marie Egan, Andrew Charles Egan and Luann Johnston (Brett); one great grandson: Isaiah Fajardo; two sisters: Irene Miller of the state of Texas and Joan Powers (Bob) of Branson, MO; several nieces, nephews, other relatives and friends. In addition to her parents and husband, Bertie was preceded in death by her son: Milford Egan Jr.; one daughter: Kristi Dieckhoff; one grandchild: Albert Joe “AJ” Egan; and one sister: Jackie Hogan. Services were held at 1:30 p.m. Friday, November 10, 2017 in the Memorial Chapels and Crematory of Waynesville / St. Robert with Pastor Chris Hendrix facilitating. Tom Lynch, along with several other friends, recalled their wonderful memories of Bertie. Serving as escorts were Ernie G. Massey, Paul Douglas Massey, Vic Lynch, Rob Rice, John Jarrett, and Bruce Parrish. Serving as honorary escorts were Ernie Massey, Tom Lynch, A.B. Hedges, Robert Watts and Bill Whitehill. Burial followed in the Waynesville Memorial Park Cemetery of Waynesville, Missouri. Memorial contributions may be made in memory of Alberta “Bertie” Egan to the St. Jude's Children's Hospital and may be left at the funeral home.

Alberta &#8220;Bertie&#8221; Christine (Decker) Egan, daughter of the late Albert and Emma (Williams) Decker, was born October 26, 1934 in Waynesville, Missouri where she grew up and graduated from Waynesville High School with the Class of 1951.... View Obituary & Service Information

The family of Alberta "Bertie" Christine (Decker) Egan created this Life Tributes page to make it easy to share your memories.