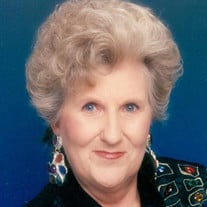 Aldine May “Dee” (Dixon) Fenton, daughter of the late James A Fenton and Addie M (Suggs) Fenton was born August 16, 1930 in Overland, Missouri. As a young girl Dee grew up in Poplar Bluff, Missouri. When she was 8 years old, Dee met her future husband Walter Dixon, (her next door neighbor) who used to come over and play. After graduation Dee attended Three Rivers Community College in Poplar Bluff. Dee became a journalist for the local newspaper where she wrote an obituary about her future husband who was reported killed in action during the Korean War in May, 1951. On February 22, 1955, Dee was united in marriage to Walter Barton Dixon and they share 61years together and many wonderful memories. Dee had a civil service career working in Fort Leonard Wood, Missouri as a clerk in Military personnel and as assistant editor and editor of the Guidon News Paper retiring in 1993. She was very talented. In her spare time, Dee enjoyed reading, drawing, painting, knitting, crocheting, belly dancing and quilting. She was a member of the Decorative Artist Association, Eastern Star, Red Hats and Shrines Ladies. Dee was always willing to take new challenges; she picked up quilting in her late 70s and was always willing to share her knowledge with others and had a kind word or a smile with her beautiful sparkling blue eyes. Dee was an excellent story teller. She made you feel part of the story and made you feel you were in the place she was talking about. Dee was a true friend, mom and grandma to many that knew her. As a young girl, Dee established her relationship with her Lord and Savior at Grand Avenue Baptist Church in Poplar Bluff. Dee went home to be with the Lord on 13 October, 2016 in the Life Care Center in Waynesville, Dee leaves to cherish her memory to her husband Walter Dixon of Waynesville, MO; three children: Richard Dixon of Austin TX, Russ Dixon (Esther) of Waynesville, MO, Randi Dixon Long (Gram) of Bloomfield Hills, MI, 13 grandchildren, 13 great grandchildren, nieces, nephews and many friends. A Celebration of Life service was held at 10:00 a.m. Saturday, November 12, 2016 in the Faith Baptist Church of Waynesville with Lin Paddock bringing words of encouragement. Randi, Dee’s daughter, recalled her wonderful memories of her mother. Soloist Becky Lercher sang “It Is Well With My Soul” and the song “I Can Only Imagine” by Mercy Me was played. Services were under the direction of Memorial Chapels and Crematory of Waynesville / St. Robert. Memorial contributions may be made in memory of Aldine Dixon to the Shriner’s Hospital for Crippled Children and may be left at the funeral home.

Aldine May &#8220;Dee&#8221; (Dixon) Fenton, daughter of the late James A Fenton and Addie M (Suggs) Fenton was born August 16, 1930 in Overland, Missouri. As a young girl Dee grew up in Poplar Bluff, Missouri. When she was 8 years old, Dee... View Obituary & Service Information

The family of Aldine May (Fenton) Dixon created this Life Tributes page to make it easy to share your memories.

Aldine May “Dee” (Dixon) Fenton, daughter of the late James A...