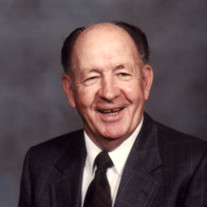 Alfred James Lercher, one of seven children born to the union of the late Henry Adam and Elizabeth Arthelia (James) Lercher, was born July 12, 1918 in Mt. Pulaski, Illinois. As a young boy, Alfred and the family moved to Missouri and he began attending school in the Dublin area. He attended Richland High School from 1933 to 1937 and graduated from high school on May 14, 1937. An experience that Alfred enjoyed sharing with family and friends was that he was a member of the 1935 basketball team that had more success than any other Richland team at the time. They were coached by Ralph Hamilton and under his careful instruction; the team won the Frisco League and the District Tournament which earned them the right to go to the State competition. During that time period, there were no classifications of schools and they were seeded to play Kansas City Northeast High School. They were defeated, but not their pride. They had attained an honor that no other basketball team from Richland had attained. On June 29, 1940, Alfred was united in marriage to Florence Kitty Miles. They shared over 58 years of marriage together and were blessed with two children, Larry and Elaine. While still in high school, Alfred began working during the summers for Bohannon and Son and upon graduation, he became a full time employee. From 1941 to 1948, Alfred worked in construction. During this time, he spent two years in the shipyards as an electrician foreman in Texas. After leaving Texas, Alfred began a successful career in sales and delivery with the Taystee Bread Company of Springfield. He formed lasting friendships with the customers that he served while delivering bread. Alfred began his career as a public servant in 1965 when he became an Alderman for the City of Richland. He served in that capacity from 1965-1977. In 1977, he was elected Mayor of Richland and served until in 1978, he accepted an appointment as Pulaski County Clerk. He filled out the term of Lynn Harris who resigned due to ill health. He was then elected to two four year terms serving until 1986. During his time as Clerk, he was instrumental in laying the groundwork for a new courthouse for Pulaski County. He also served as the Chairman of the Commission that was responsible for managing the funds for the care of the new building. Alfred was elected for a second time as Mayor of Richland and served from 1989-1991. Alfred also served on several committees for the City of Richland; some of which were the Housing Authority Board (1976-1977), Planning and Zoning Committee, and chairman of the City Utilities Board (1987-1989, 1991-1994, and 2000-2008). One of his greatest achievements was his participation in the construction of the Warren Senior Center in Richland. He was proud of the facility that he was able to help Gordon and Maxine Warren build, and took great pride in making sure the facility ran smoothly. He served as President of the board for many years, and even after his health declined, he was still interested in the progress of the center. Alfred was a 63 year member of the Richland Masonic Lodge 385 AF & AM. Alfred was also a long time member of the Richland United Methodist Church and he chaired the Finance and Trustee Boards for many years. He was very proud of the garden that was constructed on the sight of the old church parsonage. He donated a very nice iron gate and fence in memory of Florence after she passed away. In addition to serving his community, one of Alfred’s greatest joys was his family. He loved going to family reunions and most importantly, loved spending time with his immediate family; whether it was going to races and ballgames with his grandsons or watching his two great granddaughters play. He loved his family dearly and would do anything for them. Alfred went home to be with his Lord early Sunday morning July 6, 2014 in Richland Care Center having attained the age of 95 years, 11 months and 24 days. He will be sadly missed but fondly remembered by all those that knew and loved him. Alfred leaves to cherish his memory, his two children: Larry Lercher and wife Karolyn of Waynesville, MO and Elaine Curran and husband Bill of O’Fallon, MO; two grandsons: Layne Lercher and wife Becky of Waynesville, MO and Brock Lercher and wife Kasie of Richland, MO; two great granddaughters: Lauryn Lynne Lercher and Brooklynn Faith Lercher; dear friend: Sarah J. Wall of Richland, MO; several nieces, nephews, other relatives and friends. In addition to his parents, Alfred was preceded in death by his wife, Florence and six siblings: Cedric Earl, Walter Lee, Mary Emma, Dorothy Maureen, Helen Margaret and Robert Henry. A fellow community leader, Gordon Warren, summed up Alfred’s life by saying “I am convinced that there is no greater gift one can bestow than the gift of self. Of this to our community and county Alfred Lercher has given generously.” Funeral services were held at 11:00 a.m. Wednesday, July 9, 2014 in the Memorial Chapel of Richland with Rev. Stanley E. Jones and Rev. Pryor Ray Prewett officiating. Pianist Marleen Brown accompanied Becky Lercher as she sang “Peace in the Valley” and “Whispering Hope”. Becky also sang “It Is Well With My Soul”. Serving as escorts were Bobby Baker, Ken Struckhoff, Troy York, Gary Brown, Wayne Anderson and Danny Graves. Serving as honorary escorts were Don Young, Bruce Warren, Judge Greg Warren, Ret. Judge Doug Long, Bill Debo, Ret. Judge Tracy Storie, Bob Shockley and Earnie Carlton. Burial followed in the Oaklawn Cemetery of Richland, Missouri. Memorial contributions may be made in memory of Alfred Lercher to the Warren Senior Center and may be left at the funeral home

Alfred James Lercher, one of seven children born to the union of the late Henry Adam and Elizabeth Arthelia (James) Lercher, was born July 12, 1918 in Mt. Pulaski, Illinois. As a young boy, Alfred and the family moved to Missouri and... View Obituary & Service Information

The family of Alfred James Lercher created this Life Tributes page to make it easy to share your memories.

Alfred James Lercher, one of seven children born to the union...