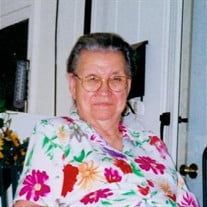 Alfreda Pearl Routh, daughter of the late Clarence Arthur and Grace Elmyre (McKinnon) Helms, was born November 14, 1923 in Crocker, Missouri where she grew up and graduated from Crocker High School. While in high school, Alfreda met the love of her life, her classmate, James Edward Routh. They were united in marriage on July 26, 1942 and were blessed with three children: Jimmy, Phyllis, and David. Immediately after their marriage, James was drafted and entered into the United States Army to serve during World War II and Alfreda stayed in Crocker while James was away. At an early age, Alfreda accepted Jesus Christ as her Savior and was baptized. She was currently a member of the Crocker Assembly of God Church. For a short time, Alfreda worked in the local laundry, but she had a calling on her life and she served as a pastor’s wife for 65 years. After being discharged from the military, James and Alfreda pastored several churches: Morrisville Assembly of God, Crocker Assembly of God, Rolla Assembly of God, St. Robert Assembly of God (which James started and pastored for 32 years), Blythesville, AR, Corning, AR, Central Assembly in St. Louis, and Richland Assembly of God. Pastor Routh would introduce Alfreda as the “Queen of the Parsonage”. Alfreda served in various places in the church as needed like pastors’ wives do. She would play the piano, teach Sunday School, be in charge of the music department, serve in the nursery and also served as President of the Women’s Missionary Team. In her spare time, Alfreda loved to travel. She enjoyed seeing the different places they were able to visit. She was talented at quilting and sewing and liked to give things away that she had made. Alfreda was also a great cook and loved serving others, especially at church socials. Alfreda went home to be with her Lord Saturday, Feb. 14, 2015, in Marshall County Hospice of Albertville, Alabama having attained the age of 91 years. Alfreda leaves to cherish her memory, her husband, James of the home; two sons, Jimmy Routh (Linda) of Dixon, MO, David Routh (Shirley) of Guntersville, AL, one daughter, Phyllis Fritzel (Robert) of Guntersville, AL; six grandchildren, Janice Rujawitz, Jennifer Bailey, Robin Smiley, Wendy Holcombe, Daren Routh and Christopher Routh; fifteen great-grandchildren; three brothers, Joseph Helms (Audrey) of Downey, CA, Arthur Helms (Barbara) of Crocker, MO, and Albert Helms of Lebanon, MO; two sisters, Veda Holeyfield of Princeton, LA and Mary Ann Gelvin (Ken) of Bonnet Mills, MO; a number of nieces and nephews; as well as a host of other relatives and friends. In addition to her parents, Alfreda was preceded in death by one sister, Louise Anderson and one brother, David Lee Helms. Services were held at 12:00 p.m. Friday, February 20, 2015 in the Crocker Assembly of God Church of Crocker, Missouri with Rev. Danny Kemp officiating. Pastor Mike Davis and family friend Vernon Henson recalled their wonderful memories of Alfreda. Mr. Henson also sang “If You Could See Where I Am Now” and Becky Lercher sang “In the Garden”, “Where We’ll Never Grow Old” and “I’ll Meet You in the Morning”. Serving as escorts were Christopher Routh, Daren Routh, Justin Rujawitz, Joey Rujawitz, George Smiley and Brian Holcombe. Burial followed in the Missouri Veterans Cemetery of Waynesville, Missouri. Services were under the direction of Memorial Chapels and Crematory of Waynesville / St. Robert.

Alfreda Pearl Routh, daughter of the late Clarence Arthur and Grace Elmyre (McKinnon) Helms, was born November 14, 1923 in Crocker, Missouri where she grew up and graduated from Crocker High School. While in high school, Alfreda met the... View Obituary & Service Information

The family of Alfreda Pearl Routh created this Life Tributes page to make it easy to share your memories.

Alfreda Pearl Routh, daughter of the late Clarence Arthur and...