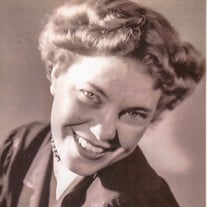 Alice Collene Osborn, daughter of the late Merton and Mabel Elvira (Herker) Wells, was born September 3, 1928 in Stoutland, Missouri. She went home to be with her Lord Friday, September 6, 2019 in her home in Rolla, Missouri having attained the age of 91 years and 3 days. Alice grew up in Camden County, Missouri and graduated from Stoutland High School. On April 28, 1955, Alice was united in marriage to James Howard Osborn in New Brunswick, New Jersey and together they had four children. Alice's most significant lifetime role was Mother to her four beloved children and grandmother to her grandchildren. She also generously shared her time and talent in volunteer activities too numerous to list. She worked in a variety of occupations, including her last 20 years of dedicated work in a medical financial department. She retired in her early 80s. Alice had a keen interest in American history, which included extensive research and writing on her own family heritage. She also wrote two volumes of poetry, along with many other published articles. She created many hand embroidered, quilted and crocheted items which she gave to family, friends and others in need. Alice especially enjoyed the many trips and vacations she was blessed to share with a variety of family members and friends. Through photos and journals, she faithfully chronicled the many historic sites, places of natural beauty and people she was privileged to visit. Alice loved her family, was proud of each one and treasured her time with them. Alice will be greatly missed, but fondly remembered by all those who knew and loved her. She leaves to cherish her memory and carry on her legacy, three children, Collene Whitelock of Alton, MO, Reba Osborn (Tony) of Edwards, CO, and Gregory Osborn (Lory) of Pacific, MO; eleven grandchildren and thirty-nine great-grandchildren; her brother, Wayne Wells (Linda) of Wichita, KS; two sisters, Sharon Shelton of Crocker, MO and Sandra Willis of Festus, MO; nine nieces and nephews; as well as a host of other relatives and friends. By faith in our Savior Jesus Christ, we anticipate a future great reunion with Grandma Alice, Grandpa Jim, James Douglas Osborn, their firstborn son and the many other Redeemed loved ones who have gone ahead. We grieve, but not as those who have no Hope. "For we believe that Jesus died and rose again. And so we believe that God will bring with Jesus those who have fallen asleep in him." - I Thessalonians 4:14 Funeral services were held at 1:30 p.m. Sunday, September 15, 2019 in the Memorial Chapel of Richland with Tim Willis officiating. The songs “Is He Worthy?” by Andrew Peterson, “One Day (When We All Get to Heaven)” by Matt Redman and “It Is Well With My Soul” by Joey and Rory were played. Alice’s grandson, delivered via video a beautiful eulogy of his grandmother. Serving as escorts were Jordon, Joshua, Jesse, Luke and Isaac Lepich, Korey Whitelock and Jason and Samuel Osborn. Burial followed in the Oaklawn Cemetery with the song “Rise Again” by Dallas Holm being played.

Alice Collene Osborn, daughter of the late Merton and Mabel Elvira (Herker) Wells, was born September 3, 1928 in Stoutland, Missouri. She went home to be with her Lord Friday, September 6, 2019 in her home in Rolla, Missouri having attained... View Obituary & Service Information

The family of Alice Collene Osborn created this Life Tributes page to make it easy to share your memories.