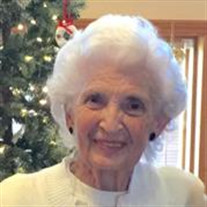 Alice Vivian (Layman) Roam, daughter of the late Arch and Zoe (Hoke) Layman, was born on October 5, 1929 at home in Lebanon, Missouri. She grew up in Lebanon and graduated Valedictorian of her class in 1947. Alice had the distinct honor of receiving the Clara Barton Scholarship from the Spanish American War Auxiliary of Lebanon. She was only one of two in the nation that received this scholarship. After high school graduation, Alice attended Washington University School of Nursing and graduated with her nursing diploma in 1950. After graduating from nursing school, Alice began working for the St. Louis Children’s Hospital and then moved to Washington, D.C. where she worked as a nurse in the local children’s hospital. She eventually moved back to Lebanon and began working at the Wallace Hospital. While working at the Wallace Hospital, Alice met the love of her life Don Roam. They met in October of 1953 and were united in marriage on February 21, 1954. They shared over 40 years together and were blessed with three children: Frank, Kim and Sherry. Alice began working for the Pulaski County Health Department in 1965 as a nurse and became the administrator of the department in 1976 and served in that capacity until her retirement in 1990. After retiring from the health department, she began helping Don at their hardware store in Richland until 1995. Alice was a very active person and loved helping people. She began serving on the Central Ozarks Medical Board since its inception in 1978 and was currently still serving on the board. She served on the Pulaski County Home Health Advisory Board and the Pulaski County Health Department Administrative Board of Trustees from 1990 to present. Alice served as the Grand Worthy Matron of the Order of the Eastern Star of Richland. She was a member of the Daughters of the American Revolution, two separate Book Clubs and had just recently earned the Distinguished Service Award for Rural Initiatives of Missouri from COMC. At an early age, Alice made a profession of faith and was baptized at the Congregational Church in Lebanon at the age of 12. After moving to Richland, she and Don became members of the First Baptist Church and she was re-baptized for her membership. She loved the Lord and would study her Bible faithfully. She worked as a nursery teacher for over 30 years at the church and also as the Acteen/GA Director for 15 years. In her spare time, Alice enjoyed knitting and was also an avid reader. She loved nursing and checking on people. Most importantly, she treasured the times that she could spend with her family, friends and church family. Alice went home to be with her Lord Monday, January 26, 2015 at her home having attained the age of 85 years. Alice leaves to cherish her memory, her three children: Frank Roam & his wife Carol of Richland, MO, Kim Roam and his wife, Debbi of Grain Valley, MO, Sherry Struckhoff and her husband Ken of Richland, MO; seven grandchildren: Jacob Roam and wife Jessie, Alice Decker and husband Ben, Abbey Roam, Caleb Roam and wife Jennifer, Tess Roam, Nicole Ingram and husband Alex and Jessi Struckhoff; one brother: RADM Lawrence Layman of McLean, VA; nieces, nephews, other relatives and friends. In addition to her parents, Alice was preceded in death by her husband, Don; granddaughter, Melanie; and sister-in-law, Carmen Layman. Alice lived life to the fullest until the very end and her biggest dream was fulfilled when she heard God say “Well done, my good and faithful servant.” Services were held at 11:00 a.m., Saturday, January 31, 2015 in the First Baptist Church of Richland with Pastor Bob Lilly officiating. Pianist, Marleen Brown accompanied soloist, Vivian King as she sang “Danny Boy” and “In the Garden.” Serving as escorts were Jacob Roam, Caleb Roam, Ben Decker, Alex Ingram, John Layman and Lavan Ruggles. Honorary escorts were the Deacons of First Baptist Church of Richland. Burial followed in the Bethlehem Cemetery near Swedeborg, Missouri. Services were under the direction of Memorial Chapel of Richland. Memorial contributions may be made in memory of Alice Vivian Roam to the First Baptist Scholarship Fund and may be left at the First Baptist Church of Richland. Online condolences may be left at www.richlandmemorialchapel.com

Alice Vivian (Layman) Roam, daughter of the late Arch and Zoe (Hoke) Layman, was born on October 5, 1929 at home in Lebanon, Missouri. She grew up in Lebanon and graduated Valedictorian of her class in 1947. Alice had the distinct honor of... View Obituary & Service Information

The family of Alice Vivian (Layman) Roam created this Life Tributes page to make it easy to share your memories.