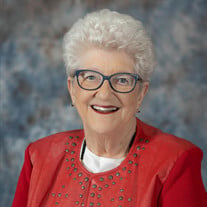 Alma Mae (Winborn) Tritten, daughter of the late Woodrow Townsend Winborn and Helen Virginia (Johnson) Winborn, was born June 4, 1936 in St. Joseph, Missouri where she grew up and graduated from Benton High School. On August 13, 1954, Alma was united in marriage to Donald (Don) Tritten in St. Joseph, Missouri. While living in St. Joseph, they were blessed with three beautiful children. Don preceded her in death on March 31, 2013. Alma and her family moved to Waynesville, Missouri in 1974, after purchasing First National Bank in St. Robert, Missouri. Over the next several years, they expanded the business and converted the bank’s charter to First State Bank of St. Robert. On June 4, 1975, the family purchased Bank of Iberia and in 1988, they purchased the Bank of Plato. Alma continued to work in the bank, and in the late 1970s, she started WT Construction Company with her father. In 1980, she became owner-operator with Colleen Laughlin of Alco Realty. Alma also owned and operated the ladies’ apparel store, “First Place”, with Jackie Larson. After the family bought Bank of Plato, Alma became more involved with the operation of the bank and served as President. In 1991, Alma and Don decided to slow their pace. They sold First State Bank of St. Robert and Bank of Plato, leaving them with Bank of Iberia. In 2002, the family decided to expand again. They built and opened a branch of Bank of Iberia in Waynesville. Alma retired as President and Chairman of the Board in 2019. Early in her life, Alma made a profession of faith. It was ongoing in her daily life. She was a longtime member of Westside Baptist Church of Waynesville, where she served as Women On Missions leader. Alma taught Sunday school for many years, loved working in Vacation Bible School and playing the trumpet in the church orchestra. She enjoyed going on BASIC trips with the senior group of the church. Alma and Don took pride in traveling the world on mission trips with VOSH/International Eye Glass Doctors. Alma was very involved in the community and was a member of the Chamber of Commerce, Committee of Fifty, Association of the US Army, and numerous non-profit organizations; including Good Samaritan and Genesis: A Place of New Beginnings. The love of Christ reflected through her as she served her community. Alma loved her family dearly, and her eyes would light up when she talked about them, especially when it came to her grandchildren and great grandchildren. She was proud of each and every one of them, as she was their biggest cheerleader. She treasured the times that she could spend with the whole family. Alma went home to be with her Lord and reunited with Don on Monday, November 22, 2021 at the Oak Pointe Assisted Living Home in Rolla, Missouri, having attained the age of 85 years. She will be sadly missed, but fondly remembered by all those that knew and loved her. Alma leaves to cherish her memory, her three children: Susan Schulte (George) of Dixon, MO, David Tritten (Liz) of Waynesville, MO, and Beth Wright (Rick) of Iberia, MO; eight grandchildren: Mendy Mullins (Chauncey) of Rolla, MO, Nathan Purdome (Andrea) of St. Croix, VI, Kyle Purdome (Teresa) of Oldfield, MO, Jason Tritten (Tracy) of Las Vegas, NV, Elise Schnarr (David) of Raymore, MO, Noelle Frank (Darin) of Waynesville, MO, Erick Wright (Katie) of Iberia, MO, and Jacob Wright (Kristina) of Eldon, MO; twenty great grandchildren: Zoey, C.J., Bryer, Addison, Kayla, Kylie, Kali, Mabelle, Cash, Millie, Matylda, Charlotte, Caroline, Gibson, Owen, Elizabeth, Liddy, Allyssa, McKinley and Claire; niece: Kim Winborn and family of Shell Knob, MO; nephew: Todd Winborn and family of Lee’s Summit, MO; brother-in-law: William Tritten of Oklahoma City, OK; special friend: Mary Fortner; and several other relatives and friends. In addition to her parents and husband, Alma was preceded in death by her brother Woody ‘Butch’ Winborn. The Tritten family would like to express their gratitude to the staff and employees of Oak Pointe in Rolla, for the wonderful care and support they extended Alma and the family, while she was a resident. They would also like to say a special thank you to Three Rivers Hospice for their outstanding care of Alma during the last days of her life. Even though she is gone from our sight, Alma’s Christ-like love and caring spirit for others will live on in our hearts forever. We take comfort knowing that we will see her again one day. Funeral services were held at 11:00 a.m. Monday, November 29, 2021 in the Westside Baptist Church of Waynesville, MO. Burial followed in the Sunset Memorial Estates Cemetery of Waynesville. Arrangements are under the direction of Memorial Chapels and Crematory of Waynesville / St. Robert. Memorial contributions may be made in memory of Alma Tritten to the Good Samaritan Resources Center or Genesis House and may be left at the funeral home.

The family of Alma Mae (Winborn) Tritten created this Life Tributes page to make it easy to share your memories.