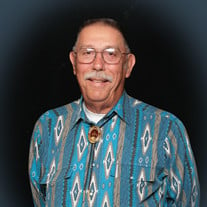 Amerigo V. Agnola, son of the late John and Lula Mae (Wade) Agnola, was born January 17, 1938 in Lester, West Virginia. He passed away Sunday, October 6, 2019 in his home after a short illness having attained the age of 81 years. At the age of 10, Rico (as he was known to his family and friends) and his family moved to Mabscott, West Virginia where he attended school and graduated from Woodrow Wilson High School with the Class of 1955. In July 1955, Rico entered the United States Air Force and served his country faithfully until his retirement in 1981 after 26 years of service. For his faithful service, Rico earned several awards and commendations; some of which include: Small Arms Expert Marksmanship Ribbon, Air Force Longevity Service Award Ribbon with One Silver Leaf Cluster, Armed Forces Expeditionary Medal, National Defense Service Medal, Good Conduct Medal (Army), Vietnam Service Medal, Air Force Good Conduct Medal with One Silver Leaf Cluster, Air Force Outstanding Unit Award Ribbon, Republic of Vietnam Gallantry Cross with One Device, Republic of Vietnam Campaign Medal, Air Force Commendation Meal with One Oak Leaf Cluster and Air Force Commendation Medal. He had attained the rank of Master Sergeant and served at different duty stations throughout his career, including his first duty station was in Greenland. While in military serving in Japan, Rico met a young woman by the name of Kinu Kimura and they were united in marriage on September 29, 1959. He brought her to the United States in 1961. They were blessed with three children: John, Arleen and Steve and shared over 31 years together before she preceded him in death on January 25, 1990. During their marriage, Rico, Kinu and the family lived in Maine, Thailand, Dover, Delaware, Minnesota and Okinawa, Japan before moving to Victorville, California where he retired from the military and they raised their three children. After his retirement from the military, Rico worked for Roadway and did other odd jobs before moving to Missouri in 2003 to be near his son and family. In his spare time, Rico enjoyed working with leather and being outdoors while hunting and fishing. He attended faithfully the St. Robert Bellarmine Catholic Church and enjoyed helping wherever he could. Most importantly, Rico loved his family and enjoyed spending time with them as much as he could, especially the grandchildren and great grandchildren. He also enjoyed spending time with his special companion, Rose Ann Brill. They had many wonderful adventures together and memories. He will be sadly missed, but fondly remembered by all those who knew and loved him. Rico leaves to cherish his memory, his three children: John Wesley Agnola of Chesapeake, VA, Arleen Dauernheim and husband Philip of Chesapeake, VA and Steve Lee Agnola and wife Linda of Waynesville, MO; one sister: Frances Brown of Bristol, TN; eight grandchildren: Annette L. Wink (John), Niaomi S. Kearns (James), Sarah Leiv (Matt), Alicia Agnola, Nathan A. Agnola, Amy Agnola, Anthony Ganaha and Nanako Ganaha; five great grandchildren: Alania Kay Lord, John Valentine Wink, Timothy Allen Lord, Jr., Belle Harley Wink and Madilyn Rose Kearns; his special companion: Rose Ann Brill of Waynesville, MO; other relatives and friends. Services with military honors were held at 1:00 p.m. Friday, November 8, 2019 in the Memorial Chapels and Crematory of Waynesville / St. Robert with Father John Groner officiating. The songs “Knowing What I Know About Heaven” by Guy Penrod, “Go Rest High on that Mountain” by Vince Gill and “Happy Trails to You” by Roy Rogers were played. Military honors were provided by the United States Air Force of Whiteman Air Force Base. Burial was held in the Missouri Veterans Cemetery. Memorial contributions may be made in memory of MSGT (Ret) Amerigo Agnola and may be left at the funeral home.

Amerigo V. Agnola, son of the late John and Lula Mae (Wade) Agnola, was born January 17, 1938 in Lester, West Virginia. He passed away Sunday, October 6, 2019 in his home after a short illness having attained the age of 81 years. At... View Obituary & Service Information

The family of MSGT (Ret) Amerigo V. Agnola created this Life Tributes page to make it easy to share your memories.