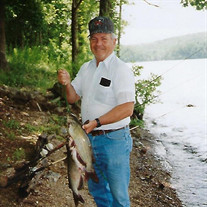 Andrew Eugene Wilson, only child of the late Claude Wilbur and Ida Bell (Christeson) Wilson, was born April 3, 1933 in Waynesville, Missouri where he grew up and graduated from high school. In January 1954, Eugene entered the United States Army and served his country faithfully until his honorable discharge in December 1955. He had attained the rank of Private First Class and earned the National Defense Service Medal. On March 4, 1955, Eugene was united in marriage to Mary Ann Lawson in Harrison, Arkansas. They shared over 63 years of marriage together and were blessed with three children: Daren, Michael and Christina. Eugene was a hardworking man and took great pride in providing for his family. In his early years, he worked at a local service station, which his dad owned and operated, before going into business for himself. Eugene owned and operated Wilson Excavating and did so until his passing. In his spare time, Eugene enjoyed being outdoors, but especially fishing, which he loved to do with his wife and family. He also liked to watch Westerns on television. At an early age, Eugene made a profession of faith. He served as a deacon for many years at Deerlick Baptist Church of Waynesville and was a current member of Hickory Hills Baptist Church of St. Robert. Eugene went home to be with his Lord on Tuesday, July 10, 2018 in the Life Care Center of Waynesville having attained the age of 85 years. He will be sadly missed, but fondly remembered by all those who knew and loved him. Eugene leaves to cherish his memory, his wife, Mary Ann Wilson of the home; three children: Daren Wilson (Sandy) of Springfield, MO, Michael Wilson (Margaret) of Waynesville, MO and Christina Wilson of Osage Beach, MO; three grandchildren: Kayla, Ethan and Zachary Wilson; three step grandchildren: Grant, Jordan and Cameron Hastings; one great granddaughter: Scarlett Hastings; other relatives and friends. Services were held at 10:00 a.m. Friday, July 13, 2018 in the Memorial Chapels and Crematory of Waynesville / St. Robert with Pastor Richard Breeden and Pastor Leo Gladden officiating. Margaret and Kayla Wilson sang “It Is Well With My Soul”, “How Great Thou Art” and “The Old Rugged Cross” and the song “Lord, Build Me Cabin in the Corner of Glory” by Hank Williams was played. Serving as escorts were Kayla, Ethan and Zachary Wilson and Grant, Jordan and Cameron Hastings. Burial with military honors followed in the Missouri Veterans Cemetery of Waynesville. Military honors were provided by the Missouri Honors Team. Memorial contributions may be made in memory of Eugene Wilson and may be left at the funeral home.

Andrew Eugene Wilson, only child of the late Claude Wilbur and Ida Bell (Christeson) Wilson, was born April 3, 1933 in Waynesville, Missouri where he grew up and graduated from high school. In January 1954, Eugene entered the United States... View Obituary & Service Information

The family of Andrew Eugene Wilson created this Life Tributes page to make it easy to share your memories.

Andrew Eugene Wilson, only child of the late Claude Wilbur and...