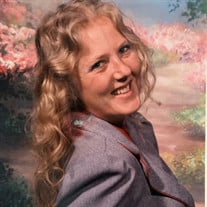 Anna Belle Albon, daughter of the late Jay Robert Henricks and Ruby (Skidmore) Henricks, was born December 20, 1959 in Seymour, Texas. As a young girl, Anna grew up in Manitou, Oklahoma. She attended school in Manitou where the schoolhouse was located directly across the street from her home. Earlier in her life, Anna grew up in a Baptist church, but was not a member at a particular church after moving to Missouri. Anna was united in marriage to Eddie Lefler and they were blessed with one son, Brian Lefler. She later married Daniel Young and they were blessed with one daughter, Danina Young. For a short time, Anna was united in marriage to John Albon. Anna met a man by the name of Rod Kirby. They became companions and were blessed with two children, Sonya and Rodney. Anna was always ready to try new things. She crocheted for many years. She enjoyed making clothes and costumes for her children and herself. She painted porcelain, made quilts and jewelry. She traveled frequently with her children on whatever adventures they were going on next. Anna was a friend to so many. She had a way of always making people laugh and feel welcomed. You always knew it was her by her laughter. There was hardly a day she wasn’t joking and laughing about something. Her sweet nature and warm heart are the first thing people notice about her. Anna had a heart of gold. She was always the first one to help anyone in need. Over the years, she has volunteered with different organizations to help out the community. Anna passed away Sunday, December 20, 2020 in her home having attained the age of 61 years. She will be sadly missed, but fondly remembered by all those that knew and loved her. Anna leaves to cherish her memory, her four children: Brian Lefler (Susan) of Buckley, WA, Danina Young of Waynesville, MO, Sonya Parrent (Tyler) of Waynesville, MO, and Rodney Kirby (fiancé Molly) of Wichita, KS; five grandchildren: Jaiden Golden, Jazmin Ashley, John Hernandez, Tyler Hernandez, and Elizabeth Lefler; three great grandchildren: Parker, Sawyer, and Andres; several nieces, nephews, other relatives, and friends. In addition to her parents, Anna was preceded in death by two brothers, Rick and Gerald; one half-brother, Dewayne, and one grandson, Nico. Celebration of Life services were held at 12:00 p.m. Wednesday, December 30, 2020 in the Memorial Chapels of Waynesville / St. Robert with Pastor Richard Breeden officiating. The songs “Amazing Grace”, “Angel”, and “One More Day” were played. Memorial contributions may be made in memory of Anna Albon and may be left at Memorial Chapels and Crematory of Waynesville / St. Robert.

Anna Belle Albon, daughter of the late Jay Robert Henricks and Ruby (Skidmore) Henricks, was born December 20, 1959 in Seymour, Texas. As a young girl, Anna grew up in Manitou, Oklahoma. She attended school in Manitou where the schoolhouse... View Obituary & Service Information

The family of Anna Belle Albon created this Life Tributes page to make it easy to share your memories.