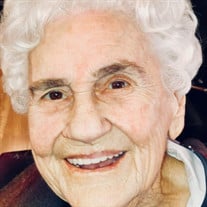 Anna Margaret King, daughter of the late Nickolas and Nettie (Johns) Futcher, was born April 1, 1928 in Harrisburg, Pennsylvania. She was a “city girl” from Kittanning, Pennsylvania and as a young girl, she enjoyed roller skating, biking, going to the movies and was a bit of a social butterfly. Anna was united in marriage to Blair Harris King and they were blessed with six children: Barry Lloyd, Diana Lynne, Blair Harris Jr., Randall Paul, Susan Joan and Anna Marie. Anna was a military wife for many years and often negotiated traveling from different duty stations with all six children while Mr. King was serving in the Army. After the children began school, Anna cooked in the schools and also managed and ran Balloons Galore, a party supply store and delivered bouquets with costumed characters. In her spare time, Anna enjoyed crafting, especially needlepoint and crocheting and working in her flower gardens. Her home was always surrounded by beautiful flowers. She also enjoyed feeding and watching the birds and other wildlife that came to her home. At an early age, Anna made an important decision and accepted Jesus as her Savior. She was currently a member of Maranatha Baptist Church of St. Robert. Throughout the years, Ann was very active in her church and her favorite ministry was teaching children about her Lord. She worked tirelessly engaging children in songs, games and activities focused on her love of Christ in Sunday School, Child Evangelism and Good News Clubs. Anna was an encourager. She was a collector of sayings, poems and interesting quotes that she would share with many people to encourage them and offer hope for whatever situation they were going through. Her love for the Lord was evident in her encouragement. Anna went home to be with her Lord, Thursday, October 12, 2017 in her home having attained the age of 89 years. She will be sadly missed, but fondly remembered by all those that knew and loved her. She leaves to cherish her memory, her two sons: Blair H. King, Jr. and Randy P. King and wife Jeannie of Waynesville, MO; two daughters: Susan J. Martin and husband Charles of Willow Street, PA and Anna M. Obermeier and husband Joey of Landisville, PA; 14 grandchildren; many great grandchildren; her best buddy, Paulina McMillan who was closer than a sister to her; other relatives and friends. In addition to her parents, Anna was preceded in death by two children: Barry Lloyd King and Diana Lynne Whittle; and her husband: Blair Harris King. Services were held at 10:00 a.m. Tuesday, October 17, 2017 in the Memorial Chapels and Crematory of Waynesville / St. Robert with Pastor Howard Malone and Pastor Keith Carnahan officiating. Rachel Potts, Anna’s granddaughter, sang “Amazing Grace, My Chains Are Gone” and “His Eye Is On the Sparrow”. Pastor Malone and Melanie Malone sang “One Day at a Time”. Anna’s son, Randy and wife Jeannie, gave a beautiful eulogy. Serving as escorts were John Cox, James Beasley, Chris Potts, Cory King, Joey Obermeier, and Jaydn Potts. Burial followed in the Waynesville Memorial Park Cemetery of Waynesville. Memorial contributions may be made in memory of Anna King to the Phelps County Hospice and may be left at the funeral home.

Anna Margaret King, daughter of the late Nickolas and Nettie (Johns) Futcher, was born April 1, 1928 in Harrisburg, Pennsylvania. She was a &#8220;city girl&#8221; from Kittanning, Pennsylvania and as a young girl, she enjoyed roller skating,... View Obituary & Service Information

The family of Anna M. King created this Life Tributes page to make it easy to share your memories.

Anna Margaret King, daughter of the late Nickolas and Nettie...