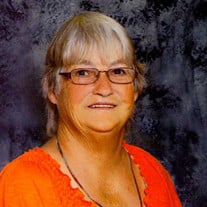 Anna Fern Smith, daughter of the late Johnny and Almeta (West) Crossland, was born December 5, 1944 on Turkey Ridge in Pulaski County, Missouri. On July 30, 1966, Anna Fern was united in marriage to Bobby Wayne Smith. Anna Fern and Bobby spent over 45 years together before he preceded her in death on August 14, 2011. They were blessed with five children: Donna, Shawn, Robert, Johnnie and Kimberly. Anna Fern spent all of her life in Pulaski County and loved raising and caring for her family where she was raised. She was very talented with handwork and enjoyed any type of craft, quilting and flower arranging. Anna Fern loved to be outdoors and you could find her either out fishing or going to yard sales. She loved taking care of her grandchildren and was “grandma” to several other children as well. Anna Fern was a caregiver. She worked for a short time at Sunset Village of the Ozarks and was a home caregiver for several people. She loved taking care of others and making their lives as comfortable as possible. Anna Fern made a profession of faith at an early age and was a member of the New Friendship Baptist Church. Anna Fern went home to be with her Lord Monday, January 11, 2016, in her home having attained the age of 71 years. She will be sadly missed, but fondly remembered by all those that knew and loved her. Anna Fern leaves to cherish her memory, her five children, Donna Marshall (Frank) of Laquey, MO, Shawn Cox (Stephen) of Laquey, MO, Robert Smith (Laura) of Richland, MO, Johnnie Smith (Jodi) of Waynesville, MO, and Kimberly Fincher (Steven) of St. Robert, MO; eleven grandchildren; sixteen great-grandchildren; two sisters, Zella Wieners (Darrell) and Sandy Guthrie, all of Waynesville, MO; three brothers, Butch, Randy and Earl Crossland, all of Waynesville, MO; two sisters-in-law Trish Bunch and Ginny Harper, both of Waynesville, MO; a number of nieces and nephews; as well as a host of other relatives and friends. In addition to her parents and husband, Anna Fern was preceded in death by five siblings. Services were held at 1:00 p.m. Wednesday, January 13, 2016 in the Memorial Chapels and Crematory of Waynesville with Pastors Chris and Curtis Hendrix officiating. The songs “Amazing Grace”, “You Raise Me Up” and “When I Get Where I’m Going” were played. Pastor Curtis Hendrix also sang “I Believe”. Serving as escorts were Matthew Voigt, Greg Cantrell, Larry Hunter, Billy Stealy, Earl Crossland and Shawn Blake. Serving as honorary escorts were Robert and John Smith. Burial followed in the Waynesville Memorial Park Cemetery of Waynesville.

The family of Anna Fern Smith created this Life Tributes page to make it easy to share your memories.