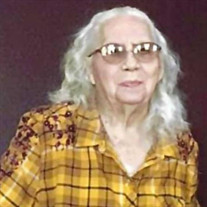 Anna Ruth Walters, daughter of the late Edward Lewis Zeigenbein and Dora Mae Carver Zeigenbein was born May 9, 1929 in Waynesville, Missouri. She grew up in Waynesville, Dixon, and Crocker areas, attending school in Waynesville. On June 2, 1950, she married Lloyd William Walters in Piggott, Arkansas. “Cotton” and “Ruth” enjoyed over forty-five years of building a life together and were blessed with seven beautiful children before his passing on April 4, 1996. Ruth was a devoted wife, wonderful mother, grandmother, and great grandmother and provided for the needs of her children. Ruth made a profession of faith at a young age. She was dedicated and committed to the Lord she served. Most of her life was a beloved member of the Assembly of God Church in Crocker, Missouri, for as long as her health allowed her to make the drive each week. Ruth later became a welcomed member into Richland’s Assembly of God Church. She loved her extended church families and they loved her. Faith and family came first with Ruth, she raised her children to know, and TRUST in God. Ruth’s first job was at the Glove Factory in Crocker, making twenty-five cents an hour. Her other jobs over the course of her life included working at Fort Leonard Wood in the Taylor Shop, Mack’s Cleaners, Ozark Fisheries, sorting fish, Shoe Factory, H.D. Lee, a cook at the Senior Center and various other restaurants. She had an incredible work ethic, and later opened her own restaurant in Crocker named, “Mom’s Place.” Feeding those she loved became a ministry. Ruth and Cotton later settling into the small town of Richland 1994, and there, she began working in the Richland School District as a cook’s helper. Ruth also babysat for her precious grandchildren, as well as other children in the community. Some of Ruth’s favorite things to do in her spare time was watching the hummingbirds, cooking delicious meals for her family, and no one ever walked away hungry at her house! She also enjoyed fishing, sewing, selling, and collecting Avon, and caring for others. She loved her family more than anything and especially adored her grandchildren and great grandchildren. If given a choice, Ruth would rather spend a day wither family over anything else she could do. Ruth left this world behind to be with her Lord and Savior Jesus Christ on the afternoon of Saturday, April 9, 2022, having attained the age of 92 years and 11 months while in the Richland Care Center. She is preceded in death by her parents, Edward and Dora, her beloved husband, Lloyd (1996), two sons, Daniel L. Walters (1982) and Randy L. Walters (2020), son-in-law, Ricky Russell (1997), one granddaughter, Jeannie Russell, her great-grandson, Matthew Walters, 2 brothers, Lewis Zeigenbein, and John Zeigenbein, two sisters, Eavlyn Poucher and Georgia Powell. She leaves behind to cherish her memory her children, James “Bill” Walters (Sally) of Richland, MO, Barbara Russell of Grady, AL, Vic Walters (Janet) of Richland, MO, Teresa Todd (Ronald) of Crocker, MO, Bobby Walters (Angie) of Linn Creek, MO; twelve grandchildren, twenty-seven great-grand-children, and more great-great-grandchildren than we can count. Her siblings, Clarence Zeigenbein (Brenda) of Waynesville, MO, Betty Cochran of Iberia, MO, Jim Zeigenbein of Campbellsburg, IN, Ted Zeigenbein of Richland, MO, Janie Lee (Chris) of Enoree, SC, Rosie Taylor (Bill) of Enoree, SC, and Peggy Wilson (Tony) of Dixon, MO; a sister-in-law, Donna Zeigenbein of St. Robert, MO; a sister of love, Lona Mae Zeigenbein of Devil’s Elbow, MO; and very special friends, Don and Maxine Henson of Richland, MO; a number of nieces, nephews, as well as a host of other relatives and friends. Ruth had a heart of gold. Her sweet smile, big hugs, and loving ways will forever be missed by those who knew and loved her. Our loss was certainly Heaven’s gain. Services were held at 12:00 Noon, Saturday, April 16, 2022, in the Memorial Chapel of Richland with Pastor Doug Jacobson officiating. Favorite recordings by Alan Jackson included, “Amazing Grace,” “Stroll Over Heaven with You,” and “Precious Memories.” Ralph Stanley and Joe Isaccs song, “We Shall Meet Someday,” was also played. Serving as escorts included Bill Walters, Vic Walters, Bobby Walters, Jimmy Walters, Chris Walters, and Ryan Todd. Burial followed in the Crocker Cemetery, Crocker, Missouri. Services were under the care and direction of Memorial Chapel of Richland. Contributions in memory of Anna Ruth Walters can be made and left at the funeral home. Online condolences can be sent at www.memorialchapelsandcrematory.com

The family of Anna Ruth Walters created this Life Tributes page to make it easy to share your memories.