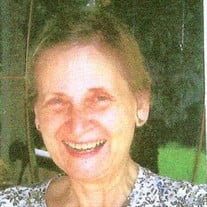 Anneliese E. Chaney, daughter of the late Otto Erdmann and Anna (Lipski) Erdmann Axt, was born August 31, 1933 in Reichau Prussia, Germany. Anneliese grew up in East Prussia during the war and finished school in Berlin. She furthered her education in Rolla, Missouri earning her degree in nursing. In May of 1957, Anneliese was united in marriage to Clayton Milton Chaney, Sr. in Battle Creek, Michigan. She and Clayton were blessed with two sons, Clayton and Roger. Anneliese was a hard working woman. After moving to the Fort Leonard Wood area in the 1960s, she began working at the General Leonard Wood Army Community Hospital and worked there until she retired. In her spare time, Anneliese enjoyed working outdoors in her flower gardens. She loved spending time with her family and friends, especially her grandchildren. Anneliese attended church at The River in Waynesville and liked the fellowship with the other members. Anneliese passed away at 10:23 p.m., Tuesday, December 30, 2014 in the Lake Regional Medical Center of Osage Beach, Missouri having attained the age of 81 years. She will be sadly missed, but fondly remembered by all those that knew and loved her. Anneliese leaves to cherish her memory, her two sons: Roger Chaney and wife Sherry of Memphis, TN and Clayton Milton Chaney and wife Glenda of Norwalk, IA; three grandchildren: Marlene Chaney, Joshua Chaney and Shawn and wife Cassandra Chaney; four great grandchildren: Alicia, Trysten, Nathyn and Seth; two siblings: Renate Filz and husband Günther of Toronto, Canada and Klaus Erdmann and wife Eveline of Berlin, Germany; two half siblings: Detlief Axt of BadEssen, Germany and Iris Axt of Berlin, Germany; several nieces, nephews, other relatives and friends. In addition to her parents, Anneliese was preceded in death by her husband and one grandchild (her namesake): Annaliese Chaney. Graveside services will be held at 10:00 a.m. Monday, January 5, 2014 in the Missouri Veterans Cemetery of Waynesville. Arrangements are under the direction of Memorial Chapels and Crematory of Waynesville / St. Robert. In lieu of flowers, the family requests memorial contributions be made in memory of Anneliese Chaney to the American Cancer Society and may be left at the funeral home.

Anneliese E. Chaney, daughter of the late Otto Erdmann and Anna (Lipski) Erdmann Axt, was born August 31, 1933 in Reichau Prussia, Germany. Anneliese grew up in East Prussia during the war and finished school in Berlin. She furthered her education... View Obituary & Service Information

The family of Anneliese E. Chaney created this Life Tributes page to make it easy to share your memories.