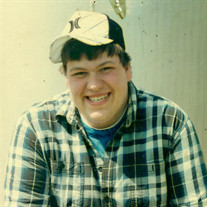 Anthony Dale Thiltgen, son of Dale Francis Thiltgen and Patricia Lynn (King) Lewis, was born January 30, 1992 in Rolla, Missouri. Anthony has lived his whole life here in Pulaski County and graduated from Crocker High School with the Class of 2011. Anthony worked in food service as a cook and in his spare time he enjoyed being outdoors. You could find him either hunting, fishing or riding 4-wheelers. He also loved listening to music. Most importantly, he treasured being with his friends and family. Anthony passed away Sunday, April 2, 2017, in the home of a friend in Waynesville, Missouri having attained the age of 25 years, 2 months and 3 days. He will be sadly missed, but fondly remembered by all those that knew and loved him. Anthony leaves to cherish his memory, his parents, Dale Thiltgen and Patricia Lewis of the home; one sister, Cristy King (Frank) of St. Robert, MO; a niece, Alyssa Abram of St. Robert, MO; a nephew, Andrew Abram of Waynesville, MO; as well as a host of aunts, uncles, cousins and friends. Anthony was preceded in death by his paternal and maternal grandparents. Services were held at 11:00 a.m. Friday, April 7, 2017 in the Memorial Chapels and Crematory of Waynesville / St. Robert with Pastor Danny Graves officiating. The songs “You Should Be Here” by Cole Swindell and “Long As I See the Light” by Creedance Clearwater Revival were played. Serving as escorts were Cody Augustyn, Josh Ballard, Jake Barnhart, Travis Danielson, Bryan Coward, Chris Thiltgen, Andrew Armstrong, Ed Delizo, Devin Curry and Kyle Thiltgen. Burial followed in the Resurrection Cemetery of St. Robert, Missouri. Memorial contributions may be made in memory of Anthony Thiltgen and may be left at the funeral home.

The family of Anthony Dale Thiltgen created this Life Tributes page to make it easy to share your memories.