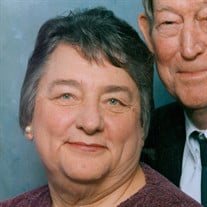 Armelia Flo Howlett, daughter of the late Cecil James and Celia (Anderson) Harris was born November 11, 1934 in Richland, Missouri and went home to be with her Lord on the morning of Saturday, October 29, 2016 while in the Aurora Nursing Center of Aurora, Missouri having attained the age of 81 years, 11 months and 18 days. “Flo,” as she was known by all her family and friends, attended school in Richland where she graduated. She went on to attend college for another year. She accepted Christ as her personal Lord and Savior at a young age in her home. She was not only a lifetime servant of Christ; but also a lifelong member of Berean Baptist Church. Flo was smitten with a fine young man by the name of Kenneth Lee Howlett. The happy couple was married on November 30, 1952, sharing over fifty nine years together before Kenneth’s passing on August 25, 2012. They were proud parents of two sons, Thomas Lee and Donald Ray. Flo lovingly took care of her home and family however, she also worked outside the home for Pulaski County as an Associate Circuit Clerk. Flo also taught music at Laquey School and spent many years teaching piano to children throughout her community. She owned and operated Hillbilly Country Crafts in Laquey. There, you could find her beautiful work on display such as horse show ribbons that she supplied for folks throughout the country. Flo was a busy lady and enjoyed crocheting, knitting, gardening and weaving. You would often see her at craft shows set up in and out of the area selling her beautiful creations she’d made. She was also a member of the Missouri Fox trotter Association and the Richland Alumni Association. Flo was in love with God’s creation especially with his birds, animals and flowers. However, none of these things kept her from the Lord; if anything they drew her closer to Him, as she was a Bible scholar and taught Sunday school for years. She loved telling people about her Lord. Flo was preceded in death by her parents, Cecil and Celia, her beloved husband, Kenneth and her two brothers: Charles and Fred Harris. Flo will be fondly remembered as a loving mother, grandmother, great-grandmother, sister, aunt, a caring neighbor and friend. She leaves behind to treasure her memory her two sons: Tom Howlett (Donna) of Aurora, MO and Don Howlett (Jonette) of Richland, MO; four grandchildren: Jimmy and Kimberly Breedlove of Marionville, MO, K.J. and Carrie Howlett of Aurora, MO, Caleb Bowers and girlfriend Kayla Talor of Dixon, MO, Alyssa Bowers of Waynesville, MO; four great grandchildren: Wesley Breedlove, James and Duane Hammonds all of Marionville, MO and Kadence Howlett of Aurora, MO; several nieces, nephews, other relatives and friends. Though we all will miss her warm smile, gentle hugs and encouraging words; today we choose to celebrate her life, a life well lived, and a wonderful example of God’s love. We will treasure the wonderful memories she has created with those who knew and loved her. Well done, thou good and faithful servant: thou hast been faithful over a few things, I will make thee ruler over many things: enter thou into the joy of thy lord. Matthew 25:21 Services were held at 11:00 a.m., Wednesday, November 2, 2016 in the Memorial Chapel of Richland, Missouri with Rev. Larry Suggs and Tracie Storie officiating. Becky Lercher performed Flo’s favorite songs which included, “Consider the Lilies,” “Somebody Bigger Than You And I” and “He.” Serving as pallbearers were Tom Howlett, Don Howlett, Caleb Bowers, K.J. Howlett, James Hammonds, Duane Hammonds and Wesley Breedlove. Honorary pallbearers included Bryan Jenkins, Buzz Hendrix, Morris Howlett and Eddie Howlett. Burial followed in the Beran Cemetery near Richland, Missouri. Services were under the direction of Memorial Chapel of Richland, Missouri. Memorial contributions may be made in Flo Howlett’s memory and may be left at the funeral home.

Armelia Flo Howlett, daughter of the late Cecil James and Celia (Anderson) Harris was born November 11, 1934 in Richland, Missouri and went home to be with her Lord on the morning of Saturday, October 29, 2016 while in the Aurora Nursing Center... View Obituary & Service Information

The family of Armelia Flo Howlett created this Life Tributes page to make it easy to share your memories.