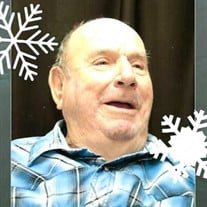 Dorel Monroe Eaken, son of the late Luther and Nora (Pruitt) Eaken, was born June 28, 1940, near Richland, Missouri in Pulaski County, Missouri, where he grew up and attended school, graduating from RHS in 1958. Dodie, as he was known by, entered into the Army fresh out of high school, proudly serving his country until his honorable discharge, February 18, 1972. Dodie received the ARMY SVC RBN/ ARCOTR OSR/AR COMP SCHVMT MDL/ AR COMP ACHVMT MEL (1OLC) NTL DEF SVC MDL/ ARMED FCS RES MDL/ MONG LSR (10 Year SVC), and retained the rank of SGT. While stationed in while stationed in Alton, Illinois, Dodie soon met and fell in love with Pamela Ann Hubbard. He knew Pam was the girl for him and the two married on September 21, 1969. They moved back to Richland, Missouri and shared over 47 years of love, laughter, and a few heartaches together before Pam’s passing January 19, 2017. God blessed them with a precious daughter, Claudia Sue. Dodie worked for Bud Alan Plastics in Camdenton, Missouri, as a machine operator, later retiring due to health reasons. He was a longtime member of the American Legion Post 240. Dodie enjoyed watching TV, going to old car shows, and shooting the breeze with anyone who would listen. He was feisty, ornery, and enjoyed people. Most importantly, Dodie treasured his family and looked forward to spending time with them. Dodie accepted Christ and was a member of Grace Baptist Church in Richland. When Dodie’s health permitted him to attend, he greeted everyone with a huge smile, or a funny story. He always enjoyed chatting with people there. Dodie went home to be with his Lord, Friday, January 8, 2021 while in the Lake Regional Hospital, Osage Beach, Missouri, having attained the age of 80. Dodie leaves to cherish his memory his loving daughter, Susie Myers and her husband, Bobby of Richland, MO, two nieces, one nephew, and several great nieces and nephews, other relatives, and friends. In addition to his parents, Dodie was preceded in death by his wife, Pam, one brother, Loral Eaken and one infant sister, Willa Sue Eaken. Dodie will be sadly missed but will always be remembered by all those who knew and loved him. Services were held at 2:00 p.m., Thursday, January 14, 2021, in the Memorial Chapel of Richland with Pastor Tony Shaw officiating. Becky Lercher sang, “In the Garden” and “Lily of the Valley,” other songs played included “Three Wooden Crosses” and “Daddy’s Hands.” Serving as escorts were Ira Moss, Chris Lane, Todd Lane, Logan Barber, Jeremy Mashburn, Rick Shaffer, and Rex Morgan. Honorary escorts included Bobby Myers, Ernie Ealey, Clyde Winfrey, and Larry Lane. Burial with military honors followed in the Elm Grove, Cemetery near Richland, MO. Services were under the direction of Memorial Chapel of Richland. Memorial contributions may be left in memory of Dorel Monroe Eaken and can be left at the Memorial Chapel of Richland Funeral Home. Online condolences may be made at www.memorialchapelsandcrematory.com

Dorel Monroe Eaken, son of the late Luther and Nora (Pruitt) Eaken, was born June 28, 1940, near Richland, Missouri in Pulaski County, Missouri, where he grew up and attended school, graduating from RHS in 1958. Dodie, as he was known by, entered... View Obituary & Service Information

The family of Army Veteran, Dorel Monroe Eaken created this Life Tributes page to make it easy to share your memories.