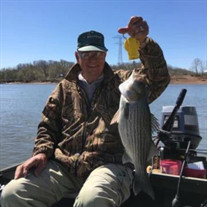 Arthur James Helms of Crocker, Missouri was born on September 1, 1933 to Clarence and Grace Elmyere (McKinnon) Helms. Early Sunday morning, on January 10, 2021, Art departed this life with his loving wife Barbara by his side. He had lived 87 years, 4 months, and 9 days. Art was united in marriage on October 3, 1952, to Christine (Collins) Helms, and from this union three children were born: Gregory, Artina, and Andy. Christine preceded Art in death on November 13, 1977. Fifteen years later, Art gained Valerie, Michelle, and Mark as children when he married Barbara Gayle Helms on July 11, 1992. Art attended the University of Missouri his freshman year and then transferred to Missouri State, where he was part of the 1953 National Championship basketball team. Art was named All-American and was inducted into the Missouri State Hall of Fame on February 20, 1993. After college, Art was drafted by the St. Louis Hawks of the NBA but chose to play for the Wichita Vickers in the National Industrial basketball league. After his basketball career was over, Art returned to Crocker where he was the proprietor of Art’s Service Station for 24 years. He increased his involvement with the community through coaching little league basketball and baseball, being the president of the Crocker Chamber of Commerce, and by serving as the Western District County Commissioner for 12 years. Art also had a 34-year contract to provide school busses for the Crocker School district, where he and Barbara would frequently drive children safely to and from school and various events. Art enjoyed fishing, pheasant hunting with family and friends, and his morning routine of drinking coffee with Barbara while watching the birds and squirrels feeding. Above all else, he loved spending time with his family – whether it was fishing, hunting, or sitting around the table for a fish fry, as long as he was surrounded by loved ones, Art was content. Art accepted Jesus Christ as his Lord and Savior at an early age and was baptized at the First Baptist Church in Crocker on December 2, 2001. Those left to mourn the passing of Art include his wife Barbara (Quesenberry) Helms of Crocker, and his children and their spouses: Greg and Terri Helms of Hot Springs, Arkansas; Artina and David Vincent of Pell City, Alabama; Andy and Deatte Helms of Crocker, Missouri; Valerie Helms of St. Robert, Missouri; Michelle and Michael Gaddie of Lake Forest, California; Mark and Toni Helms of Liberty Lake, Washington. He is also survived by his brother Joseph and Audrey Helms of Downey, California, and his two sisters, Veda Holyfield of Louisiana, and Mary Ann and Ken Galvin of Linn, Missouri. Over the years Art grew to know, love, and inspire 16 grandchildren and 11 great-grandchildren. Art was preceded in death by his wife Christine (Collins) Helms, father Arthur Clarence Helms, mother Grace (McKinnon) Helms, two sisters Alfreda Routh and Louise Anderson, two brothers David and Albert Helms, and grandson Zachary Helms. Services were held at 12:00 p.m. Saturday, January 16, 2021 in the First Baptist Church of Crocker, Missouri with Pastor Robin Salsman officiating. Art’s son, Andy Helms, recalled his wonderful memories of his dad. Jimmy Moore sang “Amazing Grace”, the song “Down to the River to Pray” was played, and pianist Lisa Schwandt accompanied the congregation as they sang “I’ll Fly Away”. Serving as escorts were Ty Helms, Keith Ellis, Steven Helms, Chas Swanenburg, Joseph Allevi, Austen Gaddie, and Clayton Gaddie. Serving as honorary escorts were Bob Goodrich, Travis Gilstrap, Bud Newcomb, Bob Boulware, Joe Helms, Jim Moulder, Ken Galvin, and Claude Massie. Burial followed in the Crocker Memorial Park Cemetery of Crocker, Missouri. Services were under the direction of Memorial Chapels and Crematory of Waynesville / St. Robert. Memorial contributions may be made in memory of Art Helms and may be left at Memorial Chapels and Crematory of Waynesville / St. Robert.

Arthur James Helms of Crocker, Missouri was born on September 1, 1933 to Clarence and Grace Elmyere (McKinnon) Helms. Early Sunday morning, on January 10, 2021, Art departed this life with his loving wife Barbara by his side. He had lived 87... View Obituary & Service Information

The family of Arthur "Art" James Helms created this Life Tributes page to make it easy to share your memories.

Arthur James Helms of Crocker, Missouri was born on September...