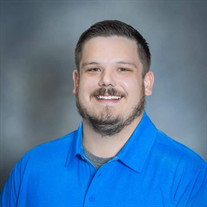 Ashton Michael Auerswald, age 29, of Waynesville, MO passed away Thursday, September 30th in his home. Memorial Services will be held at 10:30 a.m. Thursday, Oct. 7, 2021, in Memorial Chapels and Crematory of Waynesville/St. Robert. Visitation will be held Wednesday evening from 5 to 7 p.m. in the funeral home with arrangements under the care of Memorial Chapel. He is survived by his wife, Paige of Waynesville, MO; his mother, Jennifer Lesniak (Mark) of Elk Grove Village, IL; his brother, Brandon Auerswald of Bloomingdale, IL; two sisters, Jessica Johnson (Collin) of Decatur, IL and Jazzmine Hagan (Calob Lee) of Decatur, IL; his father-in-law and mother-in law, Frank and Nadina Walters of Springfield, IL; his maternal-grandparents, Walt and Kathy Chambers of Decatur, IL; a sister-in-law, Hailey Collins (Casey) of Rolla, MO; bonus siblings, Kimberly Lesniak (Chris) of Gilberts, IL, Brett Lesniak (Jeni) of Platteville, WI, and Cherene Anderson (Paul) of Burr Ridge, IL; his bonus mom, Stacey Hagan (Rodney) of Decatur, IL; his maternal uncle and aunt, Mark Chambers of Gilberts, IL, and Brooke Finnigan (David) of Prosper, TX; his paternal uncles and aunts, Karin Dyer (Brad) of Murfreesboro, TN, Ron Auerswald of Decatur, IL, Glen Auerswald (Erin) of Peoria, IL, and Heather Steward (Brad) of Decatur, IL; nieces and nephews, Adeline Collins, Henry Collins, Carter Johnson, and Alayah Lee; as well as a host of other relatives and friends. Lastly, his beloved dogs, who were the light of his world, River, Little One and Bug. Memorial Contributions in memory of Ashton Auerswald may be left at the funeral home. Online condolences can be sent at www.memorialchapelsandcrematory.com Ashton Auerswald grew up in Decatur, IL and had many hobbies. He was a talented saxophone player, loved talking about cars and guns, and he loved cooking. One of his biggest love languages was being able to cook for other people. If you were lucky enough to experience this you know you could taste the love. He had a large smile, a deep, hearty laugh, and was always wearing his flip flops – even in the dead of winter. Ashton was always willing to help anyone who needed a hand whether it was a dear friend or a complete stranger. His favorite pass time was getting to spend time on the river with his friends and family and all his free time was spent there floating, fishing, or kayaking. Anytime people got together he could get everyone to have a good time and insisted on helping people enjoy their lives to the fullest. He always said, “I’m here for a good time, not a long time.” Anyone who knew Ashton can attest that he was not a fan of the awkward or sad situations. He was always the person who would make jokes – even at the most inappropriate times – to make everyone smile and be more comfortable. We all know he would want us to spend this day celebrating his life and telling funny stories and memories.

The family of Ashton Michael Auerswald created this Life Tributes page to make it easy to share your memories.