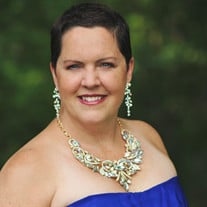 Audra Rosenberger Greening, daughter of Glenn F. Rosenberger and Suzanne (Murphy) Henley, was born August 26, 1972 in Abington, Pennsylvania. She passed away Wednesday, November 7, 2018 in the Phelps County Regional Medal Center of Rolla, Missouri having attained the age of forty-six. As a young girl, Audra and her family moved to Florida where she graduated from high school. She went on to further her education and obtained her Master’s Degree. Audra enlisted in the United States Army and served her country faithfully until her honorable discharge. She earned several awards and commendations for her faithful service. While serving in the military, Audra met the love of her life…another United States Army soldier by the name of Kevin Philip Greening. They were united in marriage on July 5, 1997 in Boyton Beach, Florida. They shared over twenty-one years of marriage together and six children: Amanda, Jay, Lee, Eva, Nic, and Mei. Due to Audra and Kevin being in the military, the family was transferred to different duty stations. In 2014, they came to Fort Leonard Wood, Missouri where Audra became very involved at their church, Westside Baptist Church. She was a Bible study leader and volunteered at the church wherever she was needed. Audra was a hard worker, whether it was at her home, church or any job that she had. She was a great sales woman and made friends very easily throughout her time. In her spare time, she loved animals and working in her vegetable and flower gardens. Most importantly, she loved her family tremendously and enjoyed spending time with them as much as possible. Audra leaves to cherish her memory, her husband: Kevin Greening of St. Robert, MO; her father: Glenn F. Rosenberger of Delray Beach, FL; her mother: Suzanne Henley of West Palm Beach, FL; six children: Amanda Stone of Seattle, WA, Jay Greening (Brook) of Waynesville, MO, Lee Greening of San Diego, CA, and Eva, Nic, and Mei Greening all of St. Robert, MO; two grandchildren: Peighten and Hunter; one sister: Heather Rosenberger of Oakland, FL; maternal grandmother: Ceil Murphy of Buckingham, PA; mother-in-law: Barbara Greening of Queen Creek, AZ; other relatives and friends. A Celebration of Life Service with military honors was held at 1:00 p.m. Monday, November 12, 2018 in the Westside Baptist Church of Waynesville with Pastor John Shaw officiating. The songs “So Will I” by Hillsong United, “Come Alive (Dry Bones)” by Lauren Daigle, “I Surrender” by Hillsong and “Same Power” by Jeremy Camp were played. Military honors were provided by the Missouri Honors Team. Arrangements were under the direction of Memorial Chapels and Crematory of Waynesville / St. Robert. Memorial contributions may be made in memory of Audra Greening and may be left at the funeral home.

The family of Audra Rosenberger Greening created this Life Tributes page to make it easy to share your memories.