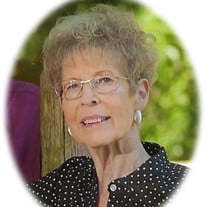 Audrey Naomi Fuller, the youngest of five children born to the union of the late Charles Henry and Nora May (Johnson) Brown, was born July 12, 1941 in Vienna, Maries County, Missouri. Naomi grew up in Vienna and graduated from Vienna High School in 1959. During her growing up years she cared for (“bossed around”) many of her nieces and nephews since they were close to the same age. After graduating from high school, Naomi worked for a short time at the Missouri Baptist Building in Jefferson City before beginning to work at Brown Shoe Factory in Dixon in June 1960. It was during her time at the factory, that a co-worker, Marie Hudson, set her up on a blind date with her cousin, Bill Lee Fuller. Bill and Naomi dated from July until September and were united in marriage on September 30, 1960. They shared over 57 years of marriage together, many wonderful memories and three children: Bradford, Brent and Belinda. Bill preceded her in death on April 12, 2018. On June 1, 1966, Naomi began working at the Waynesville Security Bank as a bank teller. She worked her way up and became the first woman Vice President of the bank, which was a major accomplishment in those days. She could do math calculations faster than an adding machine which was to her advantage. She retired from the bank on February 29, 2000 to help raise her grandkids and keep an eye on her “Billford”. At an early age, Naomi had made a profession of faith and was a member of the Union Hill Baptist Church in Vienna. Shortly after she and Bill were married, she insisted that he attend church with her and was able to lead him to Christ. They became members of the Gasconade Baptist Church in 1961, where Naomi was still a member. She loved working in the church and held many positions throughout the years. She served as Sunday School teacher, Treasurer, Secretary, Bible School director and helped at the Baptist Camp where she was needed. Her family’s salvation was very important to her and she made sure that every one of her children and grandchildren were saved. Naomi was a member of the Hansen Chapter Order of the Eastern Star for many years and served as treasurer. She also served as secretary of the Pulaski County Water District #2 Board. Naomi was a true farmer’s wife and helped Bill wherever she was needed. Through blood, sweat and hard work, and determination, she and Bill were able to buy three farms and she ran the financials up until she fell and broke her hip in 2018. Naomi loved her family tremendously and enjoyed the years she was able to help raise her grandchildren. She loved spending time with them and the rest of the family every chance she could. She attended every event her grandchildren were involved in until her health began to decline. She was proud of every member of her family and her eyes would light up every time one of them would come by to visit. Naomi went home to be with her Lord and reunited with Bill on Thursday, October 1, 2020 in her home having attained the age of 79 years. She will be sadly missed, but fondly remembered by all those that knew and loved her. Naomi leaves to cherish her memory, her three children: Brad Fuller (Holly) of St. Robert, MO, Brent Fuller (Susan) of Vienna, MO and Belinda York (Brad) of Waynesville, MO; seven grandsons: Justin Fuller, Jerred Fuller, Jordan Fuller, Ethan York, Joel Fuller, Evan York and McCrae Fuller; one granddaughter: Sevanah Fuller; two great grandchildren: Audrey Lee Fuller and Jason Brent Fuller; two step granddaughters: Honeylee Strain and Hayley Richardson; three step great granddaughters: Mylee and Presley Strain and Rockford Richardson; one brother: Donley Brown (Rose) of Jefferson City, MO; sisters-in-law: Dolores Beachle (Clinton) of St. Genevieve, MO, Jewell Rand of Springfield, MO and Shirley Schweiss (Norman) of Rolla, MO; several nieces, nephews, other relatives, and friends. In addition to her parents and her husband, Naomi was preceded in death by two brothers: Marion and Boyd Brown; and one sister: Ruth Anderson. Services were held at 11:00 a.m. Tuesday, October 6, 2020 in the Memorial Chapels and Crematory of Waynesville / St. Robert with Pastor Mark Tallant officiating. Becky Lercher sang “What A Day That Will Be”, “How Beautiful Heaven Must Be”, “When We All Get to Heaven” and “Far Side Banks of Jordan”. Serving as escorts were Naomi’s grandchildren. Burial followed in the Waynesville Memorial Park Cemetery of Waynesville. Memorial contributions may be made in memory of Naomi Fuller to the Dunkard Cemetery Fund or the Union Hill Cemetery Fund and may be left at Memorial Chapels and Crematory of Waynesville / St. Robert.

Audrey Naomi Fuller, the youngest of five children born to the union of the late Charles Henry and Nora May (Johnson) Brown, was born July 12, 1941 in Vienna, Maries County, Missouri. Naomi grew up in Vienna and graduated from Vienna High... View Obituary & Service Information

The family of Audrey Naomi Fuller created this Life Tributes page to make it easy to share your memories.

Audrey Naomi Fuller, the youngest of five children born to the...