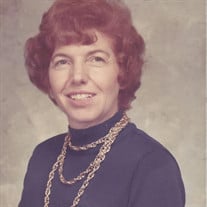 Barbara was born September 14, 1932 in Richland, Missouri to her parents William “Cecil” and Althea Marie (Banister) Osborne. Her mother died while Barbara was still a small child. In 1934, her father was remarried to Nellie “Roberta” Powers, and Roberta became a very loving and dear mother to Barbara. Barbara grew up in Richland. She graduated from Richland High school in 1950. Barbara later married and began her life as a military family. She later moved to Memphis, TN, living there almost twenty years, before moving to Springfield, MO, finally settling in Smithville, MO for the remainder of her life. Barbara was devoted to her family and enjoyed taking care of her home. She loved staying and taking care of her grandchildren, tending to them and caring for their needs. She loved going to their events and showing her support. Barbara made a profession of faith in Christ at a young age. She was a deeply devoted Christian woman of God. She read her Bible daily, seeking out His will for her life. Barbara attended Smithville Family Worship Center, until failing health prohibited her from leaving her home. She dearly loved her extended church family and especially enjoyed her times of fellowship together. Barbara left her earthly home to be with her Lord and Savior on July 22, 2019, in Smithville, Missouri, having attained the age of 86. She leaves behind to cherish her memory, her daughter and son-in-law, Jean and Jon Sampsel of Valparaiso, IN; her son and daughter-in-law, John and Penny Carroll of Niangua, MO; her son and daughter-in-law, Doug and Lisa Carroll of Smithville, MO; 6 grandchildren, Hilary, Erin, Jennifer, Michael, Zachary, and Rachel; 7 great-grandchildren, Carter, Walker, Gabe, Kendall, Leslie, Derrett, and Avery. two brothers, Keith Osborne of Waynesville, MO and Ronnie Osborne of Fayetteville, AR, one sister and brother-in-law, Charlas and Jim Bales of Waynesville, MO; several other relatives and friends. Barbara was preceded in death by her parents, Cecil and Roberta Osborne, and her brother Lyle. Though Barbara is gone from our sight, she will always remain in the hearts of all those who knew and loved her. Services were held at 2:00 p.m., Saturday, August 3, 2019 in the Memorial Chapel, Richland, Missouri with Pastor Danny Graves officiating. “He Touched Me” and “How Great Thou Art” were sung by soloist, Charlas Bales. Family and friends served as escorts. Burial followed in the Oaklawn Cemetery. Services were under the care and direction of Memorial Chapel of Richland. Online condolences can be sent at www.memorialchapelsandcrematory.com

The family of Barbara Lucille Carroll created this Life Tributes page to make it easy to share your memories.