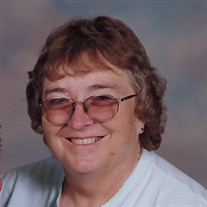 Barbara Anne Hergemueller, daughter of the late Forrest Henry Jackson and Eleanor Morna (Geiger) Jackson, was born September 15, 1941 in Bethel, Kansas. As a young girl, Barbara grew up in Turner, Kansas and graduated from Turner High School. On March 11, 1961, Barbara was united in marriage to William “Bill” Lee Hergemueller in North Kansas City, Missouri. They have shared over 60 years of marriage together and shared five children: Jean, Debra, Clifford, William Jr., and Michael. Barbara was a hardworking woman and took great pride in helping to provide for her family. She worked as a mail handler in Rocky Flats and in her spare time, was a member of the Lafayette Fire Department Auxiliary and Civil Defense. Barbara loved nature, especially watching birds. She was a very talented artist and quilter and was able to share her talents with her family and friends in the different items she made for them. Barbara also enjoyed playing a good game of bingo. After moving to the Swedeborg, Missouri area, Barbara began attending the Richland Christian Church and attended every time she could. Most importantly, she loved spending time with her family, especially the grandchildren. Barbara passed away Wednesday, February 23, 2022 in the Life Care Center of Waynesville having attained the age of 80 years. She will be sadly missed, but fondly remembered by all those that knew and loved her. Barbara leaves to cherish her memory, her husband: Bill Hergemueller of the home; three children: Jean Geiter (Dave) of Blue Springs, MO, Debra Johnson of Crocker, MO, and Clifford Hergemueller (Candy) of Brighton, CO; two siblings: Clarence Jackson of Drexel, KS and Sue Schlessinger (Ron) of Bolivar, MO; ten grandchildren; fourteen great grandchildren; other relatives and friends. In addition to her parents, Barbara was preceded in death by two sons: William Hergemueller, Jr. and Michael Allen Hergemueller; two brothers: Forrest and Sam Jackson; and three sisters: infant Gloria Jackson, Joann Sears, and Grace Kenney. Celebration of Life services will be held at 11:00 a.m. Saturday, March 5, 2022 in the First Christian Church of Richland. Arrangements are under the direction of Memorial Chapels and Crematory of Waynesville / St. Robert. Visitation will be held from 10:00 a.m. until time of service at 11:00 a.m. Saturday, March 5, 2022 in the First Christian Church of Richland. Memorial contributions may be made in memory of Barbara Hergemueller and may be left at Memorial Chapels and Crematory of Waynesville / St. Robert.

The family of Barbara Anne Hergemueller created this Life Tributes page to make it easy to share your memories.