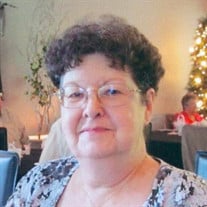 Barbara Thelma Leitgeb, daughter of the late Joseph and Mary Violet (Bath) Strouse, was born November 22, 1940 in Bethlehem, Pennsylvania where she grew up and graduated from high school in 1958. Barbara met the love of her life, an Army soldier, William Donald Leitgeb. They were united in marriage in Hellertown, Pennsylvania on April 1, 1959. They shared over 55 years of marriage together and were blessed with three children: Mary, Pauline and Barbara. Due to William being in the military, Barbara and the family moved several times and came to Fort Leonard Wood in 1970 where they decided to stay after William’s retirement. Barbara took great pride in helping to provide for her family and was a hardworking woman. She worked as a housekeeper in Fort Leonard Wood lodging, but for the most of her working years she was able to stay at home and take care of her family. In her spare time, Barbara enjoyed being outdoors while working in her garden or watching birds. She was an avid Barbie Doll collector and was very talented when it came to handwork. She was able to crochet and knit and enjoyed sharing items with her friends and family. Barbara also liked to cook. Most importantly, she treasured spending time with her family, especially the grandchildren. Barbara passed away Monday, June 2, 2014 in the Mercy Hospital of Springfield, Missouri having attained the age of 73 years, 6 months and 11 days. She will be sadly missed, but fondly remembered by all those that knew and loved her. Barbara leaves to cherish her memory, her husband: William Leitgeb of the home; three children: Mary Ford of Waynesville, MO, Pauline Leitgeb of North Kansas City, MO and Barbara A. Pfeffer (Jim) of Omaha, NE; six grandchildren: Bill Sumrall (Bethany) of Kansas City, MO, Paula Sumrall of Waynesville, MO, Daniel Sumrall of Leawood, KS, and Victoria, Alexandra and Nicholas Pfeffer, all of Omaha, NE; one great grandchild: Brenya Sumrall; one sister: Alma Young (George) of the state of Pennsylvania; other relatives and friends. In addition to her parents, Barbara was preceded in death by a number of brothers and sisters.

Barbara Thelma Leitgeb, daughter of the late Joseph and Mary Violet (Bath) Strouse, was born November 22, 1940 in Bethlehem, Pennsylvania where she grew up and graduated from high school in 1958. Barbara met the love of her life, an Army soldier,... View Obituary & Service Information

The family of Barbara Thelma Leitgeb created this Life Tributes page to make it easy to share your memories.

Barbara Thelma Leitgeb, daughter of the late Joseph and Mary...