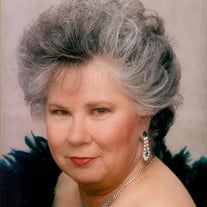 Barbara Kay McClure, daughter of the late Johnnie Davidson and Faye (Allen) Davidson Lessy, was born June 24, 1943 in West Plains, Missouri. As a young girl, the family moved to Poplar Bluff, Missouri where Barbara graduated with the Class of 1961 of Poplar Bluff High School. On February 4, 1961, Barbara was united in marriage to Jerry Carmack McClure at Twenty-Nine Palms, California. They shared over 56 years of marriage together and were blessed with four children. Barbara furthered her education by attending and graduating from Columbia College in 1993 with a Bachelor of Arts Degree in Psychology and a Bachelor of Science Degree in Business Administration, with an emphasis on computer information systems in 1994. In addition to going to college and raising a family, Barbara worked as an Office Automation Clerk as a civil service employed at Fort Leonard Wood, Missouri. In her spare time, Barbara enjoyed ceramics, going bowling and riding horses. She was a member of the Toastmasters Organization and was also a licensed pilot. Barbara passed away Friday, September 1, 2017 in the Life Care Center of Waynesville, Missouri having attained the age of 74 years, 2 months and 7 days. She will be deeply missed, but fondly remembered by all those that knew and loved her. Barbara leaves to cherish her memory, her husband: Jerry McClure of Waynesville, MO; four children: David McClure, Jay McClure, Rhonda Powell and Teresa Pritchard; three siblings: Vernon Davidson, Nancy Cooper and Sharon Clark; four grandchildren, one great-grandchild and other relatives and friends. Services were held at 11:00 a.m. Tuesday, September 5, 2017 in the Memorial Chapels and Crematory of Waynesville / St. Robert with Pastor Chris Hendrix officiating. The songs “Amazing Grace” and “Peace in the Valley” were played. Serving as escorts were family and friends. Burial followed in the Sunset Memorial Estates Cemetery of Waynesville. Memorial contributions may be made in memory of Barbara McClure to the St. Jude’s Children’s Hospital and may be left at the funeral home.

The family of Barbara Kay McClure created this Life Tributes page to make it easy to share your memories.

Barbara Kay McClure, daughter of the late Johnnie Davidson and...