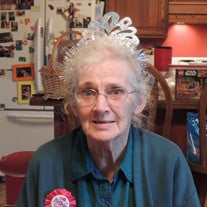 Barbara Ann McDonald, 82, died November 3, 2016 at Sunset Village Nursing Home in St. Robert, Missouri. Born May 20, 1934, in The Bronx, New York, Barbara grew up in New York City and graduated from St. Nicholas of Talentine High School in 1952. She married William H. McDonald in New York City on September 18, 1954 and lived in New York City, New York, Selden, New York, Sierra Vista, Arizona and Crocker, Missouri. While living in New York, Barbara worked for a chiropractor’s office in Centereach, New York until her retirement in 1996 at which time she moved to Crocker, Missouri to live with her daughter Amy. After coming to this area, Barbara worked for a short time at the Rock of Ages School. Barbara was an avid reader, enjoyed doing crafts of any kind, crossword puzzles and cooking. She made her home very homey and comfortable. She was very involved in her church and spent much time in prayer. Barbara is survived by sons: William H. McDonald, Jr. (Susan) of Vietnam, and Gerard J. McDonald (Nimfa) of the state of Arizona; two daughters: Amy T. Hassett (Dan) of Crocker, Missouri and Jeannie E. Andrew (Billy) of Ridge, New York; one sister: Elaine P. Perro of St. Robert, Missouri; 11 grandchildren; 16 great grandchildren; other relatives and friends. Barbara was preceded in death by her mother, Agnes Guilfoyle, her stepfather, Eugene Guilfoyle and her husband. Services were held at 7:00 p.m. Monday, November 7, 2016 in the Memorial Chapels and Crematory of Waynesville / St. Robert with Pastor Richard Harris officiating. The songs “Amazing Grace, My Chains Are Gone” by Chris Tomlin, “In My Life” by the Beatles, “Wish You Here” by Mark Harris, and “Give Me Jesus” by Jeremy Camp. Burial was held in Calverton National Cemetery of Calverton, New York. Arrangements were under the direction of Memorial Chapels and Crematory of Waynesville / St. Robert. Memorial contributions may be made in memory of Barbara McDonald and may be left at the funeral home.

The family of Barbara Ann McDonald created this Life Tributes page to make it easy to share your memories.