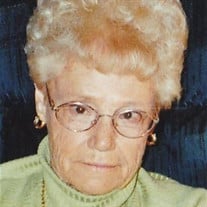 Barbara Jo (Alexander) Perkins, daughter of the late Dorsey James and Thelma Irene (Jones) Alexander, was born March 8, 1933, in the small community of Sleeper, Missouri, where she grew up and went to school. Barbara made a profession of faith in Christ at a young age. She was a member of Grace Baptist Church of Richland, Missouri, where she attended as long as her health permitted. On January 27, 1968, Barbara married James Edwin Perkins in Springfield, Missouri. Together they shared many years of love and laughter, until his passing on January 1, 2002. Barbara had an outgoing personality that came in handy when she chose to go to work outside her home as a waitress. She greatly enjoyed being around people. Barbara had a kind and generous heart and would lend a helping hand in time of need. However, Barbara’s first priority was taking care of her home and family, nothing compared to the time she spent making memories with them. Barbara had many hobbies over the years such as collecting angels, cooking. She also loved spending time outdoors camping and fishing. Barbara entered into the presence of her Lord in the early morning hours of Monday, June 15, 2015, in the University of Columbia Hospital & Clinics, Columbia, Missouri having attained the age of 82 years. She leaves to cherish her memory, two daughters: Donna Bishop (John) of Springfield, MO and Teresa Elliott (Joe) of Roach, MO; two brothers: Bobby Alexander of Montreal, MO and Dickie Alexander of Crocker, MO; 3 grandchildren: Tonya Nanney (Jeff), John Curtis Bishop all of Springfield, MO and Brandi Decker of Roach, MO; 4 great-grandchildren: John Collin, Liam and Kieran Bishop and Colton James Nanney; her special friend, Don West of Richland, MO; several nieces, nephews, other relatives and friends. Barbara was preceded in death by her grandparents, Joe and Ollie Jones, parents, Dorsey and Thelma Alexander, husband James Edwin Perkins, one son, Bobby West, sister, Shirley Stewart, brother, Dorsey Alexander, sister-in-law, June Alexander and her beloved granddaughter, Jamie Decker. Barbara was a loving daughter, wife, mother, grandmother, sister, and friend. She will be sadly missed by all those who knew and loved her. Graveside services were held at 11:00 a.m. Wednesday, June 17, 2015 in the Montreal Cemetery, Montreal, Missouri with Pastor Fred Bobe officiating. Barbara’s favorite song “Amazing Grace” was sung by those in attendance. Serving as escorts were Joe Elliot, John Bishop, Jeff Nanney, Curtis Bishop, Bobbie Alexander, Dickie Alexander, Don West, John Collin Bishop, Liam Bishop, Kieran Bishop and Colton James Nanney. Services were under the direction of Memorial Chapel of Richland. Memorial contributions in lieu of flowers may be made in memory of Barbara Perkins to the Montreal Cemetery Fund and may be left at the Memorial Chapel of Richland.

Barbara Jo (Alexander) Perkins, daughter of the late Dorsey James and Thelma Irene (Jones) Alexander, was born March 8, 1933, in the small community of Sleeper, Missouri, where she grew up and went to school. Barbara made a profession of faith... View Obituary & Service Information

The family of Barbara Jo Perkins created this Life Tributes page to make it easy to share your memories.