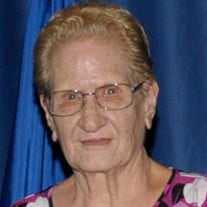 Barbara Stubblefield was born August 8, 1933, in St. Louis, Missouri. She was the youngest of four children born to the union of the late Herman and Velma Whitthoft. At a young age, Barbara was confirmed in the Lutheran Church. Barbara’s dad was stationed at Jefferson Barracks, Missouri when she was born, and the family later transferred to Tyndall Air Force Base in Florida. Barbara spent many of her adolescent years in Springfield, Florida and many of her amazing childhood memories are from her youth years spent around Panama City, Florida. Barbara was a 51-year employee of the Federal Government. She began her service at Kelly Army Airfield, Texas in 1956 as she transcribed classified reports and documents for the War Department. She had a small break in service to care for her family and then continued serving our Nation at several locations across the United States culminating in her retirement on January 4, 2010, from Fort Leonard Wood, Missouri as a Medical Transcriptionist. She and her late husband Wallace John "Bud" Stubblefield were married in February 1972 and were two peas in a pod. The many laughs they would have on various adventures was evidence of the love they shared for each other. Their favorite vacation spots included any number of beaches along the southern coast of the United States. Barbara and Bud were an amazing team and were always quick to lend a helping hand to friends, family, or anyone in need. Barbara loved board games and spent every Thursday as game night playing Scrabble with those who dared to test her vast knowledge of words. Barbara enjoyed traveling and spending time with her family. She was known to pick up and travel across the United States to visit friends and relatives at a moment's notice. Always quick with a quip, she and her two brothers and sister were an absolute riot to be around. She loved to care for her many grand and great grandchildren even late into her late years. She always enjoyed gardening and the fresh vegetables it would produce. Barbara passed away Saturday, June 19, 2021 having attained the age of 87 years. She will be sadly missed, but fondly remembered by all those that knew and loved her. She leaves to cherish her memory one daughter: Linda Bell of St. Robert, MO; two sons: Donald Ridenhower of St. Robert, MO, and Andrew Ridenhower of Enid, OK; many grandchildren, great grandchildren, and great-great grandchildren; other relatives and friends. In addition to her parents and husband, Barbara was preceded in death by one son: Joseph Michael Bell; and three siblings: Herman Witthoft, Olin Whitthoft, and Francis Witthoft. Celebration of Life Services will be held at 2:00 p.m. Friday, July 9, 2021 in the Memorial Chapels and Crematory of Waynesville, MO. Arrangements are under the direction of Memorial Chapels and Crematory of Waynesville / St. Robert. Visitation will be held from 1:00 p.m. until time of service at 2:00 p.m. Friday, July 9, 2021 in the funeral home. Memorial contributions may be made in memory of Barbara Stubblefield and may be left at Memorial Chapels and Crematory of Waynesville / St. Robert.

Barbara Stubblefield was born August 8, 1933, in St. Louis, Missouri. She was the youngest of four children born to the union of the late Herman and Velma Whitthoft. At a young age, Barbara was confirmed in the Lutheran Church. Barbara&#8217;s... View Obituary & Service Information

The family of Barbara Stubblefield created this Life Tributes page to make it easy to share your memories.