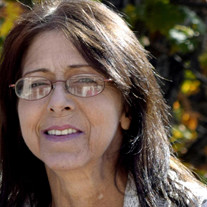 Beatrice “Bea” Cundiff, daughter of Donald Gene and Frances Zora Belle (Anderson) Taylor, was born December 22, 1963 in Waynesville, Missouri. Bea, as she was known to her family and friends, grew up in the Swedeborg, Richland and Crocker areas and attended schools there. She was a member of the Swedeborg Baptist Church. Bea was united in marriage to Michael Wesley Cundiff and shared many memories until he preceded her in death on June 14, 2005. Bea was united in marriage to Russell Wayne Mitchell on December 28, 2014 in Four Seasons, Camden County, Missouri. Bea was a hard working woman. She worked in every capacity at several of the local restaurants, to include the Fugitt Family Restaurant in Richland. In her spare time, she enjoyed going to garage/yard sales and antiquing. Her greatest joy was taking care of three of her grandchildren, who she raised as her own. Her days were spent making sure all their needs and wants were met and she was doing that until her final breath. Bea passed away Tuesday, July 14, 2015 in her mother’s home having attained the age of 51 years. She will be sadly missed, but fondly remembered by all those that knew and loved her. Bea leaves to cherish her memory, her husband: Russell Mitchell of Lake Ozark, MO; two daughters: Shauna LaChance of Swedeborg, MO and Lea Ann Barba (Henry) of Waynesville, MO; her mother: Zora Belle Taylor of Crocker, MO; seven grandchildren – three of which she raised: Taylor, Izak and Samuel LaChance; two brothers: Larry Taylor (Sherry) of Crocker, MO and Farrell Taylor (Debbie) of Crocker, MO; sister: Della Miller (Rocky) of Osage Beach, MO; several nieces, nephews, other relatives and friends. In addition to her husband, Mike, Bea was preceded in death by her father: Don Taylor; and one grandson: T.J. LaChance. Graveside services were held at 10:30 a.m. Thursday, July 16, 2015 in the Oaklawn Cemetery of Richland, MO with Pastor Doug Jacobsen officiating. Serving as escorts were Bea's loving family and friends. Services were under the direction of Memorial Chapel of Richland. Online condolences can be sent at www.memorialchapelsandcrematory.com.

Beatrice &#8220;Bea&#8221; Cundiff, daughter of Donald Gene and Frances Zora Belle (Anderson) Taylor, was born December 22, 1963 in Waynesville, Missouri. Bea, as she was known to her family and friends, grew up in the Swedeborg, Richland... View Obituary & Service Information

The family of Beatrice "Bea" Cundiff created this Life Tributes page to make it easy to share your memories.