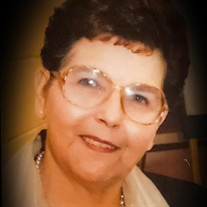 Belinda Sue Schuler, daughter of Leo Vernon Reed and Barbara Jean (Dozier) Reed Koutas, was born December 20, 1949 in Houston, Texas. As a young girl, Belinda grew up in Cincinnati, Ohio and attended Mt. Healthy High School and Culinary Arts School where she received many awards for cooking and cake decorating. On September 18, 1969, Belinda was united in marriage to Paul Edward Schuler, Jr. in Cincinnati, Ohio. They shared over 49 years of marriage together and were blessed with three children: Donald, Lorie, and Paul. Belinda enjoyed cooking her whole life and was able to be employed doing what she loved. She served as food director for the Child Care Development Center on Fort Leonard Wood until her retirement. In her spare time, Belinda enjoyed going RVing, camping, and fishing. She loved to watch movies, play the slot machines, and liked anything with Scooby-Doo. But her biggest enjoyment came from spending time with her family and friends, especially her children and grandchildren. She loved to bake at the holidays for her family. Belinda had made a profession of faith and was baptized with her husband, Paul. They were members of the Bethlehem Baptist Church and she was regularly active in the church until her stroke. She was also a member of the DAV #49 Women’s Auxiliary and a member of American Indian Nation. Belinda went home to be with her Lord on Tuesday, September 15, 2020 in the Dixon Nursing and Rehab Center of Dixon, Missouri having attained the age of 70 years, 8 months, and 26 days. She will be sadly missed, but fondly remembered by all those that knew and loved her. Belinda leaves to cherish her memory, her mother: Barbara Koutas of Cincinnati, OH; one daughter: Lorie Layman (Craig) of Crocker, MO; two sons: MAJ (Ret) Donald Mazza (Melissa) of Columbus, OH and Paul Schuler, III (Tiffany) of Columbia, MO; fourteen grandchildren: Justin, Andrea, Chris, Elizabeth, Caleb, Kason, Gavin, Devin, Ava, Matthew, Tony, Carter, Tyler and Gage; one great grandchild: Sophie; two siblings: Sharon Smith and George Koutas, both of Cincinnati, OH; several nieces, nephews, other relatives and friends. Belinda was preceded in death by her father: Leo Vernon Reed; stepfather: Tieki Koutas; husband: Paul E. Schuler, Jr.; one sister: Brenda Scott; two brothers: Ernie Reed and Rick Weiner; and one grandson: Kyle Shane Schuler. Funeral services were held at 11:00 a.m. Monday, September 21, 2020 in the Memorial Chapels and Crematory of Waynesville / St. Robert with Pastor Billy Williams officiating. The songs “A Song for Mama” by Boyz II Men, “Goodbyes, the Saddest Word” by Celine Dion and “You Raise Me Up” by Josh Groban were played. MAJ (Ret) Donald Mazza and Paul Schuler III recalled their wonderful memories of their mother. Inurnment was held at 9:00 a.m. Tuesday, September 22, 2020 in the Missouri Veterans Cemetery of Waynesville. Memorial contributions may be made in memory of Belinda Schuler and may be left at Memorial Chapels and Crematory of Waynesville / St. Robert.

The family of Belinda Sue Schuler created this Life Tributes page to make it easy to share your memories.