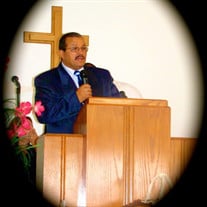 Benito V. Perez, Jr., son of Benito Perez and Carmen Maria (Ortiz) Perez, was born February 27th, 1953 in Puerto Rico. He went home to be with his Lord and Savior Jesus Christ on Saturday, September 5th, 2020 at his home in St. Robert, Missouri having attained the age of 67 years. As a young boy, Benito grew up in Puerto Rico until the age of 12. He and his family came to the United States and settled in Lancaster, Pennsylvania where he grew up and entered the United States Army and continued his education. Benito faithfully served his country in the United States Army as a combat engineer for 20+ plus years and earned several awards and commendations. He had attained the rank of Staff Sergeant. On November 5th, 1977, Benito was united in marriage to Eneida M. De Jesus in Lancaster, Pennsylvania. They shared over 42 years of marriage together and were blessed with seven children: Benito, Ana, Ricardo, Neftali, Obed, Luis, and Leslie. After Benito and Eneida were married, the family became a traditional military family and was transferred to different duty stations; some of which were two tours in Germany, and they served in Aschaffenburg and Darmstadt. In August 1991, the family was transferred to the Fort Leonard Wood area where Benito retired from the military. Earlier in his life, Benito had made an important decision in his life and accepted Jesus Christ as his Lord and Savior. He was very conscious about sharing his faith with everyone he encountered. In 1991, Benito felt the call to start a Spanish ministry in the Waynesville / St. Robert area. After much prayer, the Spanish Christian Lighthouse was started. Due to him following the leading of the Holy Spirit, Benito, his family and the Spanish Christian Lighthouse has touched hundreds of lives not only in the Waynesville area, but all across the world through those military families that have attended the church throughout the years as well as those who were reached through missionary work around the world. Benito loved his community and was always trying to do things to help the community reach people; whether it was feeding those that were hungry, finding housing for those without homes, or touching them spiritually. He put others before himself. His sacrificial love was even manifested in his family life. Benito loved his family tremendously and wanted to make sure his family was taken care of. He loved spending time with them, especially fishing, cornhole or watching the Miami Dolphins football games (his favorite team). Benito will be sadly missed, but fondly remembered by all those who knew and loved him. He leaves to cherish his memory, his wife: Eneida of the home; seven children: Benito V. Perez III (Nichol) of St. Robert, MO, Ana Del Carmen Perez of St. Robert, MO, Ricardo Perez (Daniella) of Woodbridge, VA, Neftali Perez (Priscilla) of Waynesville, MO, Obed Caleb Perez (Dally) of Baumholder, Germany, Luis Marquize Perez (Karissa) of El Paso, TX, and Leslie Faith Perez, of Kansas City, KS; nineteen grandchildren; ten siblings; a number of nieces and nephews; as well as a host of other relatives and friends. Even though he is gone from our sight, Benito’s legacy will live on in our hearts, community, and world forever. “Then the King will say to those on his right, ‘Come, you who are blessed by my Father; take your inheritance, the kingdom prepared for you since the creation of the world. For I was hungry and you gave me something to eat, I was thirsty and you gave me something to drink, I was a stranger and you invited me in, I needed clothes and you clothed me, I was sick and you looked after me, I was in prison and you came to visit me.’ The King will reply, ‘Truly I tell you, whatever you did for one of the least of these brothers and sisters of mine, you did for me.’” - Matthew 25:34-36 & 40 Celebration of Life Services were held at 12:00 p.m. Sunday, September 13, 2020 in the Spanish Christian Lighthouse Center of Waynesville with Benito V. Perez III officiating. Thaydious Proctor, Neftali Perez, Ricardo Perez, Richard Wells and Nichol Perez all participated in the service. The songs “Hosanna”, “Somos El Pueblo De Dios”, “Gozo Inefable” and “El Poder De Tu Amor” were all played. Serving as escorts were Benito V. Perez III, Ricardo Perez, Neftali Perez, Obed Caleb Perez, Luis Marquize Perez, and Mason Delano Perez. Services were under the direction of Memorial Chapels and Crematory of Waynesville / St. Robert.

The family of Pastor Benito V. Perez Jr. created this Life Tributes page to make it easy to share your memories.