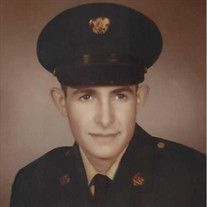 Bennie Urban Montoya was born in Ruidoso, New Mexico on November 2, 1945, to Cecelia (Montoya) Silva. He grew up and attended school in Lincoln County, in the small village of Ruidoso Downs, New Mexico, United States by his loving grandparents, and grew up in the Catholic faith. As a young man, Bennie entered into United States Army, serving his country faithfully, earning several awards and commendations. After his military career ended, Bennie went to work for several Body Shops before opening up his own. He later he went on to work for Electrovert, painting. Bennie then decided to leave, and begin his career at Fort Leonard Wood, MO for Civil Service as a mechanic working with Heavy machines for the military until his retirement. In Bennie’s spare time he enjoyed fishing with family and friends and was an avid fan of the Denver Broncos. He also enjoyed fixing things, such as, lawnmowers, or bicycles for his friends and neighbors. Bennie was a great mechanic and worked on vehicles of any kind. Bennie is preceded in death by his mother, Cecelia Silva and stepfather, Ramone Silva, two brothers, Johnny Urban and Richard Urban, and his beloved son, Anthony “Tony” Charles Montoya. Bennie passed away the evening of May 19, 2021, at his home in Richland, MO, having attained the age of 75, leaving behind to cherish his memory, his children, Bennie Joe Montoya and his wife, Debbie, Yalen Gray, and Amanda Lynn Montoya and all of Richland, MO; 2 grandchildren: Austin Deven Gray of Richland, MO, and Cody Witt and his wife, Erica of the state of FL; three siblings: Mary Randolph, Candy Guevara, and Raymond Greigo, all of Ruidoso, NM; numerous nieces, nephews, other relatives, and friends. Bennie enjoyed life. He was a devoted to his family and was a kind neighbor and friend. He’d do anything for anyone if ever a need. Bennie will be missed…but never forgotten. Services were held from 12:00 Noon until time of service at 2:00 p.m., Thursday, July 29, 2021, in the Memorial Chapel of Richland with Pastor Danny Graves officiating. Interment with Military Honors followed in the Oaklawn Cemetery of Richland. Services were under the care and direction of Memorial Chapel of Richland. Memorial contributions may be made in memory of Bennie Montoya and may be left at the Memorial Chapel of Richland funeral home.

Bennie Urban Montoya was born in Ruidoso, New Mexico on November 2, 1945, to Cecelia (Montoya) Silva. He grew up and attended school in Lincoln County, in the small village of Ruidoso Downs, New Mexico, United States by his loving grandparents,... View Obituary & Service Information

The family of Bennie Urban Montoya created this Life Tributes page to make it easy to share your memories.