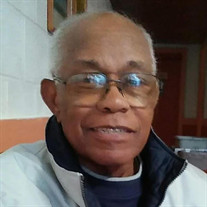 SSG (Ret) Bernard Daniels, son of the late Lemuel Daniels and Cora Lee (Walker) Daniels, was born March 16, 1932 in Montgomery, Alabama. As a young boy, Bernard grew up in Montgomery and Prattville, Alabama where he attended North Highland High School. In 1950, Bernard began working for Prattville Progress Printing Company. He worked there until he enlisted in the United States Marine Corp in 1952. He served in the Marine Corp from 1952 – 1955 and served during the Korean Conflict. After his discharge from the Marine Corp, Bernard enlisted in the United States Army in 1958 and served his country faithfully until his retirement in 1973. He had attained the rank of Staff Sergeant and earned several awards and commendations; some of which included: Combat Infantry Badge, 4 Bronze Stars, Aircraft Crewman Badge, and 23 Air Medals w/Valor device and 3 ARCOMs. He served in the Vietnam War from 1965–1967 and 1969-1970. After his retirement from the U.S. Army, Bernard continued to serve his country as a civil service employee on Fort Leonard Wood, Missouri. He worked with the Fort Leonard Wood Printing Plant, Weapons Inspector, and Medical Record Technician before retiring in 1988. Bernard also furthered his education through different military schools and Adult Welding School in 1982. On November 1, 1972, Bernard was united in marriage to Irene Ann (Yankausky) Younger at the First Christian Church of Waynesville. They shared over 48 years of marriage together and two families were brought together. Bernard and Irene shared 10 children. At an early age, Bernard had made a profession of faith and this decision influenced several decisions he made in his life. While still in Alabama, he was a member of the Pilgrim Rest Baptist Church in Montgomery, and later in Missouri, he was a member of the New Life Ministries of Plato, MO, along with several other churches throughout his life. On August 1, 1988, he became an ordained minister with Solomon’s Ministries International Inc. One of his favorite past times was reading and studying his Bible and ministering to people. Bernard also liked to cook in his spare time. But he enjoyed spending time with his family and friends the most. Just getting together with family was a highlight for him. Bernard went home to be with his Lord on Sunday, May 9, 2021 in his home having attained the age of 89 years. He will be sadly missed, but fondly remembered by all those that knew and loved him. Bernard leaves to cherish his memory, his wife: Irene Daniels of the home; nine children: Pamela Emmanuel (Greg), Patricia Culpepper (Mark), David Daniels (Judy), Judy Thompson, Richard Daniels, Carolyn Will Wagner, Paul Daniels, John Daniels, and Luke Daniels; daughter-in-law: Renee Daniels; twenty-four grandchildren; thirty-six great grandchildren; three great-great grandchildren; one sister: Sue Ann Crawford; several nieces, nephews, other relatives, and friends. In addition to his parents, Bernard was preceded in death by one son: Ray Daniels; one son-in-law: Robert Thompson; stepmother: Mary Daniels; eleven siblings: James H. Daniels, John B. “Percy” Daniels, Kathryn Zimmerman, Newton B. Daniels, Sr., Ruby Shelley, Lemely “Junior” Daniels, Jr., Benjamin F. Daniels, Thomas Daniels, McKinley “Bobby” Daniels, Tiny “Morline” Floyd, and Roosevelt Daniels. Even though he is gone from our sight, his loving and serving spirit will live on in our hearts forever. Graveside services with military honors were held at 1:00 p.m. Thursday, June 3, 2021 in the Missouri Veterans Cemetery of Waynesville, MO. Arrangements are under the direction of Memorial Chapels and Crematory of Waynesville / St. Robert. Memorial contributions may be made in memory of SSG (Ret) Bernard Daniels and may be left at Memorial Chapels and Crematory of Waynesville / St. Robert.

The family of SSG (Ret) Bernard Daniels created this Life Tributes page to make it easy to share your memories.