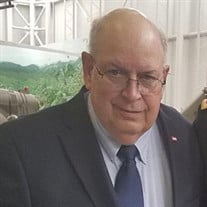 Bernard Leroy Easton, son of the late Jack Easton and Alta Vernell (King) Easton, was born February 26, 1951 in Alexandria, Virginia. In 1971, Bernard entered the United States Army and served his country faithfully until his retirement in 1992. For his faithful service, he earned several awards and commendations; some of which include: Army Commendation Medal (4 Oak Leaf Clusters), Army Achievement Medal (2 Oak Leaf Clusters), Good Conduct Medal (6th Award), National Defense Service Medal w/Bronze Service Star, NCO Professional Development Ribbon (3), Army Service Ribbon, Overseas Service Ribbon (5), and Expert Rifleman Badge, M16. He had attained the rank of Sergeant First Class. While serving in the military, Bernard met a young lady by the name of Mi Yon Kim. They were united in marriage on March 18, 1980 in Ft. Belvoir, Maryland. They shared over 40 years of marriage together and were blessed with three children: Joseph, Kimberly, and James. After retiring from the military, Bernard was able to do more of the things that he enjoyed. He enjoyed traveling, spending time with friends, watching Washington Redskins football and St. Louis Cardinal Baseball. You could frequently find him enjoying breakfast at the West Side Café or Cracker Barrel or spending time at the American Legion. He was a very caring person and enjoyed taking care of the people he cared most about. Most importantly, he loved his family tremendously. He also loved spending time with them, especially the grandchildren. Bernard passed away Thursday, November 5, 2020 in the General Leonard Wood Army Community Hospital of Fort Leonard Wood, Missouri having attained the age of 69 years. He will be sadly missed, but fondly remembered by all those that knew and loved him. Bernard leaves to cherish his memory, his wife: Mi Yon Easton of Waynesville, MO; two sons: Joseph Easton (Sara) of Graham, WA, and James Easton (Kelly) of Walton, KY; three grandchildren: Isabelle, Abigail, and Logan Easton; other relatives and friends. In addition to his parents, Bernard was preceded in death by his daughter, Kimberly. Services were held at 1:00 p.m. Tuesday, November 17, 2020 in the Memorial Chapels and Crematory of Waynesville / St. Robert with Chaplain (MAJ) Jason W. Southard officiating. The songs “Amazing Grace”, “Jesus Loves Me” and “How Great Thou Art” were played. Burial with military honors followed in the Missouri Veterans Cemetery of Waynesville with military honors being provided by the United States Army of Fort Leonard Wood, Missouri. Memorial contributions may be made in memory of Bernard Easton and may be left at Memorial Chapels and Crematory of Waynesville / St. Robert.

The family of SFC (Ret) Bernard Leroy Easton created this Life Tributes page to make it easy to share your memories.