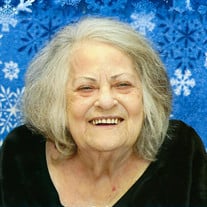 Bernice Ellen Walters, daughter of the late Elzie and Ruby (McKinnon) George, was born October 21, 1941 in Dixon, Missouri. She passed away Saturday, December 15, 2018 in the Richland Care Center having attained the age of seventy-seven years. Bernice grew up in Dixon until the age of fifteen. The family moved to Waynesville at that time and she remained here in the area until her passing. Bernice was united in marriage to Dwight Walters and they shared seven children: Dennis, Deana, Darla, Dawn, Debra, DeeAnn and Daren. Bernice took great pride in taking care of her family; not just at home but by helping to provide for them as well. She worked at the Waynesville Hospital for many years before working at Sunset Village of the Ozarks in St. Robert. In her spare time, Bernice enjoyed being outdoors while fishing. She was a wonderful cook and loved cooking for her family and friends. She enjoyed playing cards at family get-togethers. Her family was the most important thing to her and she loved them dearly. Bernice leaves to cherish her memory four children, Dennis Walters (Debbie) of Montreal, MO, Deana Harting (Kenneth) of Laquey, MO, Darla Betts (Bill) of Waynesville, MO, and Dawn Decker (Darrell) of Waynesville, MO; twenty-one grandchildren; numerous great-grandchildren and great-great grandchildren; two brothers, Randy George (Debbie) of Newburg, MO and Doug George of Dixon, MO; a number of nieces and nephews; as well as a host of other relatives and friends. In addition to her parents, Bernice was preceded in death by her husband, Dwight Walters; three children: Debra Perkins, DeeAnn Young and Daren Walters; five sisters: Marlene Melton, Shirley Greene, Geneiva Medley, Prentice Holder and Pam Boevingloh; and one brother: Gregory George. Funeral services were held at 1:00 p.m. Thursday, December 20, 2018 in the Memorial Chapels and Crematory of Waynesville / St. Robert with Pastor Danny Graves officiating. Bernice’s great granddaughter, Zoe, read a beautiful eulogy to her grandmother. The songs “I Can Only Imagine”, “Angel”, “I’ll Fly Away” and “Goodbye’s (The Saddest Word)” were played. Serving as escorts were Denny Walters, Jr., Ismael Felgado, Ferando Maldonado, Derik Walters, Josh Walters and Coby Walters. Burial followed in the Sunset Memorial Estates Cemetery of Waynesville. Memorial Contributions in memory of Bernice Walters may be left at the funeral home.

Bernice Ellen Walters, daughter of the late Elzie and Ruby (McKinnon) George, was born October 21, 1941 in Dixon, Missouri. She passed away Saturday, December 15, 2018 in the Richland Care Center having attained the age of seventy-seven years.... View Obituary & Service Information

The family of Bernice Ellen Walters created this Life Tributes page to make it easy to share your memories.