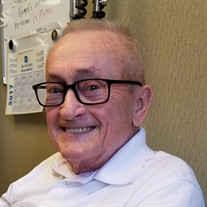 Berton Andrus Adkins, son of the late Raymond Berton Adkins and Zulema (Atkins) Adkins, was born July 5, 1937 in Eldon, Missouri. As a young boy, Bert, as he was known by his family and friends, grew up in Waynesville, Missouri and graduated from Waynesville High School with the Class of 1955. Shortly after graduation, he attended University of Missouri in Columbia. In 1956, Bert entered the United States Air Force and served his country faithfully until 1960 when he was honorably discharged in California where he decided to stay for a short while. He came back to Missouri and met a young woman by the name of Wanda Lea Tucker. They were united in marriage on May 27, 1966 in Waynesville, Missouri and were blessed with three sons: Berton, Ray, and Roy. Bert worked for a short time at the hospital on Fort Leonard Wood, but then began working for Colonial Bakery Company as a bread route salesman. He transferred to Camdenton, Missouri, and served as manager at Ezards Grocery Store for many years. In 2006, Bert and Wanda moved to Springfield, Missouri where he worked at Wal-Mart as an assembler. Bert and Wanda had made a profession of faith and when they moved to Springfield, they became very involved in their church, James River Assembly. When Wanda passed away in 2015, Bert became even more involved. He volunteered at the James River Pre-School Academy and helped with the church’s small groups. He loved his church and was willing to help wherever he could. In his spare time, Bert enjoyed taking his sons to St. Louis Cardinal baseball games and Kansas City Chief’s football games. He was a member of the Elks Lodge, life member of the VFW in Camdenton and the Masonic Lodge in Linn Creek. Bert went home to be with his Lord on Wednesday, November 25, 2020 in the Missouri Veterans Home of Mt. Vernon, Missouri having attained the age of 83. He will be sadly missed, but fondly remembered by all those that knew and loved him. He leaves to cherish his memory, three children: Berton Wayne Adkins (Diane Altis) of Blue Springs, MO, Ray Adkins of Orlando, FL and Roy Adkins (Kelli) of Willard, MO; seven grandchildren: Lance, Titus, David, Paul, Raiah, Anna and Kylee; two sisters: Jane Dickey of Branson, MO and Jenice Swearengian (Sam) of Springfield, MO; several nieces, nephews, other relatives and friends. In addition to his parents and wife, Bert was preceded in death by one brother: Edward Adkins and one sister: Kay Adkins. Graveside services with military honors were held at 12:00 p.m. Tuesday, December 1, 2020 in the Missouri Veteran’s Cemetery of Waynesville with Mark Wright officiating. Serving as escorts were family and friends. Military honors were provided by the Missouri Honors Team. Services were under the direction of Memorial Chapels and Crematory of Waynesville / St. Robert. Memorial contributions may be made in memory of Bert Adkins and may be left at Memorial Chapels and Crematory of Waynesville / St. Robert.

Berton Andrus Adkins, son of the late Raymond Berton Adkins and Zulema (Atkins) Adkins, was born July 5, 1937 in Eldon, Missouri. As a young boy, Bert, as he was known by his family and friends, grew up in Waynesville, Missouri and graduated... View Obituary & Service Information

The family of Berton Andrus "Bert" Adkins created this Life Tributes page to make it easy to share your memories.