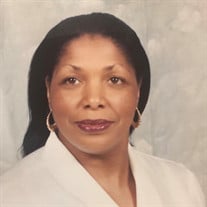 Bessie Lartina Jones, daughter of the late Floyd Booker, Sr. and Eleanor (Robinson) Booker, was born July 4, 1954 in Salem, New Jersey. She passed away Friday, October 11, 2019 in the General Leonard Wood Army Community Hospital of Fort Leonard Wood, Missouri having attained the age of 65 years. At the age of 16, Bessie was united in marriage to a United States soldier by the name of Timothy Jones. They were married in Woodstown, New Jersey and shared the next 48 years together and were blessed with two daughters: LaSandra and Lartina. Due to Timothy being in the military, Bessie and the family moved to Fort Bragg, North Carolina for a time until 1975 when they were transferred to Fort Leonard Wood, Missouri. Timothy decided to retire in the Waynesville / St. Robert area where they raised their family. Most of Bessie’s working years were spent working on Fort Leonard Wood as 1st Cook for EDP Enterprises and retired after over 25 years of faithful service at the same time maintaining the home and caring for her family and their needs. In her spare time, Bessie loved to cook and always enjoyed spending time with family. She also enjoyed knitting, going to the casino in St. Louis, having late night phone conversations with her siblings and especially playing games with her grandchildren. She loved spending time with them and always had an infectious laugh and smile. Bessie will be sadly missed, but fondly remembered by all those who knew and loved her. She leaves to cherish her memory, her husband: Timothy of the home; two daughters: LaSandra Wise (Malcolm) of Enterprise, AL, and Lartina Jones (Robert Trotter, Jr.) of Alpharetta, GA; six grandchildren: Deon, Cory and Myah Wise, Nayla Jones, Leomar-Trotter-Jones, and Ronan Trotter-Jones; four sisters: Eleanor Corbin, Rebecca Holmes, Salena Cox and Constance Booker, all of the State of New Jersey; her brother: Brian Booker of the State of New Jersey; a number of nieces and nephews; as well as a host of other relatives and friends. In addition to her parents, Bessie was preceded in death by one brother: Floyd Booker, Jr. Even though she is gone from our sight, her memory and smile will remain in our hearts forever. Services were held at 2:00 p.m. Saturday, October 19, 2019 in the Memorial Chapels and Crematory of Waynesville / St. Robert with Pastor Frank Brunais officiating. The song “Jesus Is Love” was played and Soloist Stephanie Tagge sang “Amazing Grace”. Burial was held at a late in the Missouri Veterans Cemetery of Waynesville, Missouri. Memorial Contributions in memory of Bessie Jones may be left at the funeral home.

The family of Bessie Lartina Jones created this Life Tributes page to make it easy to share your memories.