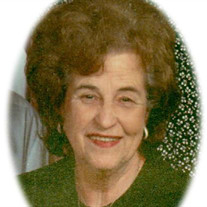 Bessie Allene (Noe) Peterson was born October 8, 1936 to James Reid Noe and Evea Viola (Fishback) Noe and departed this world to be with her Lord and Saviour on Sunday, January 1, 2017 in her home in Waynesville Missouri surrounded by her children and best friend. Allene grew up on a farm in the Richland Missouri area near Conn’s Creek with older brother Eugene and younger brother Rex. She accepted Jesus Christ as her Lord and Saviour at an early age being baptized in Conn’s Creek. She was a member of the First Christian Church of Richland and met Ralph Peterson through church and her brother Eugene. Ralph and Allene were united in marriage January 6, 1956. They shared over 59 years of marriage together and were blessed with three children; Belinda, Paula, and Tommy. Allene loved staying busy, caring for her family and working outside of the home. As Ralph would get promoted through his job with the MO Highway Department, the family would pull up stakes and move to Ralph’s new job, always making new friends along the way. They loved to fish and play cards and every move provided new and lasting family friendships. Allene was always able to secure a job at their new home and if it wasn’t her dream job; she stuck it out until she got what she wanted. Family and friends were very important to Allene. Family gatherings were always attended unless the weather kept them away because Ralph had to work. She loved her family, Ralph’s family, and her brood deeply. She was always available to her friends and family for anything at a moment’s notice. In 1970, Ralph’s last promotion brought the family to Waynesville Missouri. Allene worked as a secretary for Williams Bus Lines and later for the Waynesville RVI School District at Wood Middle School where she had many friends. She and Ralph spent her retirement years travelling with family, visiting with family and friends, antiquing, gardening, and enjoying their grandchildren. They became members of the Waynesville United Methodist Church and felt at home there. When Ralph fell ill she cared for him at home as long as she could and then visited him daily at Life Care Center in Waynesville. Allene leaves to cherish her memory three children: Belinda Carmack, Paula Dye (Harvey Lynn),and Tommy Peterson (Carrie) all of Waynesville; four grandchildren: Sarah Dye of Waynesville, Stephen Dye of Springfield MO, Isaac and Anna Peterson of Waynesville; one brother Rex Noe (Kathleen) of Lebanon MO; best friend Theresa Meyer of Waynesville; and a host of nieces, nephews, other relatives, and friends. In addition to her parents, Allene is preceded in death by her husband Ralph; one brother Eugene Noe; and one grandson James Aaron Carmack. Services were held at 1:00 p.m. Saturday, January 7, 2017 in the Waynesville United Methodist Church of Waynesville, Missouri with Pastor Patrick Moore officiating. Pianist Cheryl Wood played the prelude and postlude. Soloist Becky Lercher sang “How Great Thou Art” and “Amazing Grace” and the song “Go Rest High on that Mountain” was played. Serving as escorts were Calvin York, Ed Conley, Joe O’Brien, Jim Godfrey, Bruce Wood and Matthew Hayes. Serving as honorary escorts were Bill Winkleman, Bob Winkleman, Roy Peterson, John Zeigenbein, Jeff Zeigenbein, Lowell Zeigenbein, Gene Noe, Mark Noe and Kendall Noe. Burial followed in the Sunset Memorial Estates Cemetery of Waynesville. Services were under the direction of Memorial Chapels and Crematory of Waynesville / St. Robert. Memorial contributions may be made in memory of Allene Peterson to the Alzheimer’s Association and may be left at the funeral home.

Bessie Allene (Noe) Peterson was born October 8, 1936 to James Reid Noe and Evea Viola (Fishback) Noe and departed this world to be with her Lord and Saviour on Sunday, January 1, 2017 in her home in Waynesville Missouri surrounded by her children... View Obituary & Service Information

The family of Bessie Allene Peterson created this Life Tributes page to make it easy to share your memories.