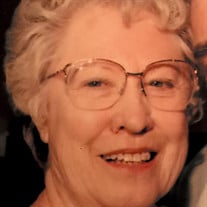 Bessie Joyce Stubbe, daughter of the late William Ewing Wever and Bessie Laura (Gibson) Wever, was born October 30, 1929 in Dodson, Texas. As a young girl, Bessie grew up in Loomis, California where she attended school. On December 4, 1948, Bessie was united in marriage to Donald Stubbe in Loomis, California. They shared over 65 years of marriage together before he preceded her in death on August 20, 2014. They were blessed with two children: Judy and Donald. During her working years, she worked various agricultural jobs, sorting, and packing fruits and vegetables. She worked for a time at The Almond Growers. She then worked and retired from Montgomery Wards as a Catalog Manager. Bessie was a very joyous person who loved to dance and was always whistling an unrecognizable tune. She loved the holidays, especially because the family was together. She enjoyed spoiling her grandchildren, great grandchildren and great-great grandchildren. After moving to Missouri, Bessie attended Swedeborg Baptist Church as long as her health allowed her to. Bessie passed away Thursday, October 29, 2020 in her daughter’s home having attained the age of 91 years. She will be sadly missed, but fondly remembered by all those that knew and loved her. She leaves to cherish her memory, her two children: Judy Belden (Bill) of Waynesville, MO and Donald Stubbe of Roseville, CA; six grandchildren: Laurie Lobland of Richland, MO, Julie Day of Richland, MO, Mel Weller (Leah) of Richland, MO, Donnie Stubbe, Abigail O’Connell (Jeff) of Roseville, CA and Bessie Stubbe of Orangevale, CA; thirteen great grandchildren: four great-great grandchildren; one sister: Myrtle Brown (Hubert) of Lincoln, CA; several nieces, nephews, other relatives and friends. In addition to her parents and husband, Bessie was preceded in death by four brothers and one sister. Private family services will be held at a later date and arrangements are under the direction of Memorial Chapels and Crematory of Waynesville / St. Robert. Memorial contributions may be made in memory of Bessie Stubbe and may be left at Memorial Chapels and Crematory of Waynesville / St. Robert.

The family of Bessie Joyce Stubbe created this Life Tributes page to make it easy to share your memories.