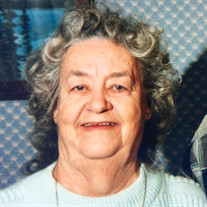 Betty Jean Franklin, daughter of the late Vern and Alta Fay (Lathrop) Davis was born February 15, 1927 in Laclede County, Missouri and went home to be with her Lord on the morning of Friday, March 10, 2017 in Lebanon, Missouri while lovingly surrounded by her family having attained the age of 90 years. Betty grew up in Lebanon where she attended school, graduating in 1944. She accepted Christ as her personal Lord and Savior at a young age. She was faithful member of Buffalo Prairie Baptist Church and served wherever there was a need. Betty met and fell in love with a handsome young man by the name of Richard Aubrey “Dick” Franklin. The two were married December 29, 1945, sharing over fifty seven years together before his passing on April 19, 2003. They were proud parents of eight children, Larry, Richard Jr., Dwight, Michael, Gary, Paula, Ava and Sue. Betty lovingly took care of her home, family and helped Dick on the farm. However, in 1966 she made a decision to further her education to become a nurse while still raising six of her children and tending to her home. Betty excelled at the top of her class, graduating from college in Trenton, Missouri with an Associate’s degree. She worked in the hospital however, predominately worked in nursing homes because of her love for older people. In 1970 the family moved to Richland where she began working in the Richland Nursing Home and later worked for the Lebanon Health Center. Betty was first LPN hired in Laclede County Health Department. Betty was a busy lady and enjoyed restoring and dressing dolls, quilting, taking care of her grandkids and cooking large meals for her beloved family on Sunday afternoons. Betty was preceded in death by her parents, her beloved husband Dick, one daughter, Sue Ann Franklin, one son, Gary Franklin, two brothers, Bill and Ron Davis and precious grandson, Christopher Garner. She leaves behind to treasure her memory four sons: Larry Wayne Franklin of Kansas City, MO, Richard Aubrey, Jr. Franklin (Linda) of Montreal, MO, Dwight David Franklin (Cindy) of Montreal, MO and Michael Joseph Franklin of Montreal, MO; two daughters: Paula Jean Garner (Charlie) of Springfield, MO and Ava Baker (Dale) of Lebanon, MO; three sisters: Judy Ruble (Nathan) of Lebanon, MO and Bessie Norman of Baxter Springs, KS and Verna Lee Triggs of Ridgecreast, CA; 16 grandchildren, 38 great-grandchildren and 2 great-great grandchildren; several nieces, nephews, other relatives and friends. Though we will miss her warm smile, gentle hugs and encouraging words; today we choose to celebrate her life, a life well lived, and a wonderful example of God’s love. We will always treasure the wonderful memories she has created with those who knew and loved her. Well done, thou good and faithful servant: thou hast been faithful over a few things, I will make thee ruler over many things: enter thou into the joy of thy lord. Matthew 25:21 Services were held at 11:00 a.m., Monday, March 13, 2017 in the Buffalo Prairie Baptist Church with Pastor Nathan Ruble and Pastor David Brown officiating. Favorite music recordings included “Safe in the Arms of Jesus,” “In the Garden” and “I Want to Stroll Over Heaven with You.” Serving as escorts were Brian Baker, Andy Baker, Scott Franklin, Trevor Franklin, Curtis Garner, Christian Garner, Zach Franklin, John Franklin and Tony Franklin. Burial followed in the Buffalo Prairie Cemetery, Montreal, Missouri. Services were under the direction of Memorial Chapel of Richland. Memorial contributions may be made in memory of Betty Jean (Davis) Franklin to The Gideon’s International or to the Buffalo Prairie Cemetery Fund and may be left at the funeral home.

Betty Jean Franklin, daughter of the late Vern and Alta Fay (Lathrop) Davis was born February 15, 1927 in Laclede County, Missouri and went home to be with her Lord on the morning of Friday, March 10, 2017 in Lebanon, Missouri while lovingly... View Obituary & Service Information

The family of Betty Jean Franklin created this Life Tributes page to make it easy to share your memories.