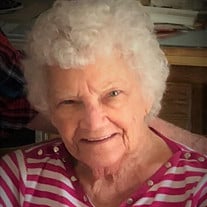 Betty Louise Hickey, daughter of James Clark and Anna Irene (Helton) Lee. She was born on August 22, 1931, in the rural area near Dixon, Missouri, where she grew up. She attended school in Dixon, graduating high school in 1948 and was baptized at a Methodist church in St Louis shortly thereafter. On September 23, 1950, Betty was married to the love of her life, Donald Dean Hickey, a handsome Navy man of WWII. The couple made their home in California for nearly fifty years before returning to Missouri in in 2006. Together, Betty and Don shared over sixty five years together before his passing on March 26, 2016. They lovingly raised their four children, Ronald Dean, Rhonda Jean, Sharon Louise and Michael Lee. Betty enjoyed taking care of her home and family, they were her world. She also loved to work outside the home as an estimator for a large drapery firm. When Betty found time she found pleasure in doing things like going to the lake, camping with the family, cooking, decorating her house, socializing with the neighbors and watching Cardinals baseball. Betty entered her Heavenly home on the on July 3, 2018, while in the Miller County Care and Rehabilitation Tuscumbia, Missouri, with family by her side having attained the age of 86. She was preceded in death by her parents, her husband Donald (2016), two daughters, Rhonda Jean (1963) and Sharon Louise (2010). Betty leaves behind her two sons: Ronald Hickey of Dana Point, CA, Michael Hickey of Orange, CA; one grandson: Sean Michael Hickey of Dana Point, CA; two granddaughters: Lauren Danielle Hickey of Dana Point, CA and Savannah Chanel Hickey of Leander, TX; her daughter in law, Rhonda Hickey of Dana Point, Ca., two sisters, Viola Rowden of Dixon, MO and Kathy Deardeuff of Crocker, MO; several nieces, nephews and a host of other relatives and friends. Betty will be sadly missed by all those who knew and loved her; however, a wonderful day of rejoicing began at Heaven’s gate when she was welcomed home by the Lord. Services were held at 11:00 a.m., Thursday, August 18, 2018 in the Wheeler Church of Christ, Dixon, Missouri with Brother Ralf Trusty officiating. Inurnment followed in the Wheeler Cemetery of Dixon. Arrangements were under the care of Memorial Chapel of Richland, Missouri. Memorial Contributions may be made in memory of Betty Hickey and may be left at the Memorial Chapel of Richland. Online condolences may be left at www.richlandmemorialchapel.com

Betty Louise Hickey, daughter of James Clark and Anna Irene (Helton) Lee. She was born on August 22, 1931, in the rural area near Dixon, Missouri, where she grew up. She attended school in Dixon, graduating high school in 1948 and was baptized... View Obituary & Service Information

The family of Betty Louise Hickey created this Life Tributes page to make it easy to share your memories.