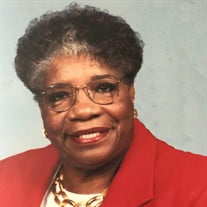 Betty Jean Simmons was born on March 19, 1933 in Fluker, Louisiana, to the late Boyd and Geneva Burton. She departed this life on Monday, July 20, 2020 at Lebanon Nursing and Rehabilitation Center, in Lebanon, Missouri, at the age of 87. She was one of five children, all of whom preceded her in death—that included four brothers: Boyd Jr., Joseph, Benjamin, and Charlie. She was educated at Fluker Elementary School in Fluker, Louisiana, and later attended Kentwood High School High School in Kentwood, Louisiana. On July 14, 1956 Betty married the love of her life, Benjamin Simmons, in Amite, Louisiana—a marriage that lasted 55 years until his death on July 6, 2011. Betty always accompanied “Simmons” to every U.S. Army domestic and foreign duty assignment thereafter. Upon Benjamin’s retirement in 1967, they made their home in St. Robert, Missouri, and eventually Dixon, Missouri in 1986. Betty retired from the Department of the Army after 31 years of service where she received numerous commendations for her outstanding service as a custodial worker. Betty started her Christian journey at an early age at Fluker Chapel AME Church in Fluker, Louisiana and later joined First Baptist Church of St. Robert; St. Robert, Missouri and then joined First Baptist Church of Waynesville, Missouri. There Betty began her 20 years journey of faithful service and membership until her illness in 2019. While a member at First Baptist of Waynesville, Betty would arrive early each Sunday for Church School and Sunday morning worship. She would also return Sunday evenings for business meetings. Her favorite song, “Victory in Jesus,” is a testament to her fervent belief in Jesus as her Lord and Savior. Betty enjoyed traveling, playing bingo, and the company of her family and close friends, and her Church Family. After her retirement she was known to travel with her friends Pauline Calloway and Rose Wright, and they were known as “the Golden Girls” on Caribbean cruises. Betty was always helpful to those in need and was well-loved by many who knew her. She demonstrated her Christian witness and was known to do all she could to help the poor, the hungry, and those in need. The work that she has done speaks: “Well done, good and faithful servant; you were faithful over a few things, I will make you ruler over many things. Enter into the joy of your lord.” (Matthew 25:11). Left to cherish her memory is her daughter, Rev. Dr. Mattie A. Carmon (and husband: Rev. Dr. Wilbur Carmon) of Somerset, New Jersey; four grandchildren, Shanel Robinson and Andrea Gray (and husband: Alex), both of Somerset, NJ; Wilbur Carmon-II (and wife: Jamie) and Robyn Parks (and husband: Aaron), both of Hillsborough, NJ; nine great grandchildren; three great-great grandchildren; a special niece Millie Simmons, and a host of nephews, nieces, other relatives, and several very loyal and faithful friends such as: Laffie Souser, Debbie Osmon, and Laura Miles. Services were held at 10:30 a.m. Wednesday, July 29, 2020 in the First Baptist Church of Waynesville with Pastor Steve Clark officiating. Former pastor, Rev. Dr. Dennis Crowder, read the obituary and reflections and recalled his wonderful memories of Betty. The congregation sang “Victory in Jesus” and “Amazing Grace” and soloist Cassie Allen sang “God on the Mountain”. Serving as escorts were family and friends. Burial followed in the Missouri Veterans Cemetery of Waynesville, Missouri.

Betty Jean Simmons was born on March 19, 1933 in Fluker, Louisiana, to the late Boyd and Geneva Burton. She departed this life on Monday, July 20, 2020 at Lebanon Nursing and Rehabilitation Center, in Lebanon, Missouri, at the age of 87. She... View Obituary & Service Information

The family of Betty Jean Simmons created this Life Tributes page to make it easy to share your memories.