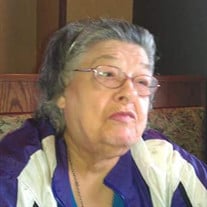 Betty Jean Wilson, daughter of Roy James and Augusta May (Seigler) Allen, was born August 3, 1938, in St. Louis, Missouri. She departed this life Wednesday, September 26, 2018, in Mercy Hospital- Springfield. On August 16, 1956, she was united in marriage to Donald L. Wilson, and to this union seven children were born. She was born and raised in the St. Louis area where she attended school. She later met and married Donald and was a caring homemaker to her family. She did babysitting in her home for children throughout the years. In her spare time she enjoyed watching Hummingbirds, caring for her cats and dogs, tending her flowers, and watching TV shows of Walker Texas Ranger, and Wheel of Fortune. She especially had a fond liking for ice cream. She is survived by her seven children, Jim Wilson (Laurie) of Osage Beach, MO, Kathy Hilliard of Jefferson City, MO, Debra McCormick of St. Robert, MO, Donna Wadsworth (Lee) of Sycamore, OH, Harold Frank Wilson of St. Robert, MO, Robert Wilson (Angela) of Siloam Spring, AR, and Billy Wilson of St. Robert, MO; ten grandchildren, and two great-grandchildren; five sisters, Neva Redmond, Jeannie Allen, Mary Allen, Ann Allen, and Sandy Allen, all of St. Louis, MO; two brothers, Buddy Allen and Gary Allen, both of St. Louis, MO; a number of nieces and nephews; as well as a host of other relatives and friends. She was preceded in death by her parents; her husband, Donald on July 17, 1999; and two grandchildren, Scotty Wadsworth and Crystal Burgard. Betty was a loving mother, grandmother and sister, and was a caring neighbor and friend. She will be fondly remembered and greatly missed by all those who knew and loved her.

The family of Betty Jean Wilson created this Life Tributes page to make it easy to share your memories.