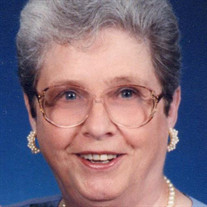 Betty Alberta (York) Winfrey, daughter of Clarence and Rosella (Talbert) York was born December 31, 1934 in Tater Hollow near Bloodland: an area now part of Fort Leonard Wood, Missouri. She departed this life July 1st at the Richland Care Center, surrounded by her family. Betty had achieved the age of eighty-one years, six months, and one day. Betty grew up in the Crocker area attending Hawkeye School. She met Clyde William Winfrey while working at International Shoe. They married on August 25, 1951 and moved to Texas, where Clyde was stationed in the army. To this union two sons were born. Betty and Clyde returned to Missouri and lived in the Stoutland area before buying a home in Richland where they lived together 55 years and lovingly raised their family. Betty was saved during a revival being held by her grandfather-in-law, Jim Winfrey, at High Point Baptist Church. She was an active member of Grace Baptist Church as long as her health allowed. Betty was a hard working wife and mother and was employed at many local factories and businesses. She will best be remembered as a wonderful cook. Her pies, chicken and noodles, and potato salad were greatly sought after at church dinners, family reunions, and The Ozark Outdoorsman. Betty's hands were always busy and she left a wonderful legacy in the beautiful quilts and afghans she made and gave away. Betty was preceded in death by her parents, two sisters Eva Becker and Verba LaPage and three brothers, Eugene, Jimmy, and Logan York. Betty is survived by her husband of 64-1/2 years, Clyde, of the home; two sons J.M. and wife Karen of Lebanon, MO, and Bill and wife, Glenda of Richland, MO. Also surviving are five grandchildren: Becci Crowder, Jeff Winfrey, Tyson Winfrey, Allison Winfrey, and Jordan Winfrey; and five great-grandchildren: Aaron Joy, Kaleb Winfrey, McKinley Winfrey, Creek Winfrey, and Nora Winfrey (arriving this fall). She is also survived by three sisters-in-law Jan York of Crocker, MO, Dr. Joyce Goldstein of Raleigh, NC, and Jeane Winfrey of Jefferson City, MO and one brother-in-law, Wayne Winfrey of Greenfield, MO, and many nieces, nephews, and friends. Betty was a loving person and had a gentle spirit. She bravely fought cancer for nearly a decade. "She was one tough lady!" Services were held at 11:00 a.m., Wednesday, July 6, 2016, in the Grace Baptist Church of Richland, Missouri with Pastor Fred Bobe officiating. Favorite music selections included, “How Great Thou Art,” “Amazing Grace,” and “I’ll Fly Away.” Serving as escorts were Tyson Winfrey, Jeff Winfrey, Dwight Crowder, Robert Greer, Henry Becker and Ray Becker. Honorary escorts included Aaron Joy, Kaleb Winfrey, Kris York, Estel Becker, Jarell York, Garell York and Charles Brown. Burial followed in the Oaklawn Cemetery of Richland, Missouri. Services were under the direction of Memorial Chapel of Richland. Memorial contributions may be made in memory of Betty Alberta (York) Winfrey to the Warren Senior Citizen Center of Richland, or to the American Cancer Society. Online condolences may be made at www.memorialchapelsandcrematory.com

The family of Betty Alberta Winfrey created this Life Tributes page to make it easy to share your memories.