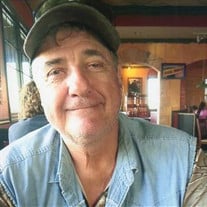 Alan William “Bill” Britt, son of the late Horace Columbus and Ena Millicient (Prince) Britt, was born February 1, 1948 in Port Clinton, Ohio. As a young boy, Bill grew up in the Swedeborg Missouri area and graduated from Richland High School. On May 24, 1967, Bill was united in marriage to the love of his life, Linda Mae Anderson and they were blessed with two children: David Alan Britt and Jerry Wayne Britt. Linda preceded Bill in death on March 4, 2015. Bill worked at Schwitzer making fans for all the major motor companies and retired after 25 years of faithful service. In his spare time, Bill enjoyed being outdoors while turkey and deer hunting. He also liked to square dance and most importantly, he loved spending time with his grandchildren and was never two steps away from his best friend…Buster, his dog and faithful companion. Bill made a profession of faith and was a member of the Swedeborg Baptist Church. Bill went home to be with his Lord Thursday, January 11, 2018 in the Lake Regional Health System of Osage Beach, Missouri having attained the age of 69 years. Bill will be sadly missed, but fondly remembered by his two sons, David Britt and his wife, Tracy of Lebanon, MO and Jerry Britt and his wife, Barbara of Richland, MO; 4 grandchildren: Levi Britt and his wife, Casie of Abilene, TX, Jacob Britt and his fiancé, Cameron Brown of Columbia, MO, Jordan and Justin Britt both of Richland, MO; his best friend, Buster; several other relatives and a host of friends. Although we will miss the warmth, laughter and enjoyment of Bill and his many stories of past outdoor adventures, the pain of our loss is softened by the memory of who he was and the joy and happiness he brought to so many hearts. We should celebrate that he has gone home to be with his precious wife, Linda and so many others with our Heavenly Father. Funeral services were held at 1:00 p.m., Thursday, January 15, 2018 in the First Baptist Church of Swedeborg, Missouri, with Pastor Doug Jacobsen officiating. Favorite songs included, “I Can Only Imagine” and “How Great Thou Art”. Serving as escorts were Jerry Britt, David Britt, Jacob Britt, Justin Britt, Levi Britt and Tom Ellis. Burial followed in the Bethlehem Cemetery Swedeborg, Missouri. Services were under the direction of Memorial Chapels of Richland. Memorial contributions may be made in memory of Bill Britt and may be left at the Memorial Chapel of Richland funeral home.

The family of Bill Britt created this Life Tributes page to make it easy to share your memories.