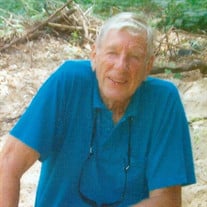 Billy L. George, devoted son of the late Charles Raymond and Carrie Mae (Tully) George, was born June 27, 1935 in Mossy Springs, Missouri where he lived until the family moved to Waynesville, Missouri. Bill was a standout basketball player on the 1951 Waynesville High School basketball team, the only Waynesville team to ever make it to the State Championship game. He received a basketball scholarship and graduated from South East Missouri State in 1957 and went on to te4ach and coach while serving in the National Guard. Bill married and raised two children, Michael George and Laurie George-Baird. Bill started several successful businesses in Waynesville and St. Robert with his brothers Dale and Larry George. The business he became most associated with was St. Robert Auto Supply, which he ran until his retirement in 1992. He was respected for his solid business practices and known for his kindness and generosity, often opening the store late at night to get a part for a stranded traveler. Bill married Hettie (Martin) George of Waynesville, Missouri in 1991. After Bill’s retirement they spent 15 winters in Florida fishing Lake Okeechobee together. In Waynesville he could be found fishing, more often than not, with his dear friends Leonard King and Larry Lercher on the Gasconade River, Big and Little Piney Rivers and Lake of the Ozarks. He was a lifelong Cardinals fan and followed local and college sports. He was a member of Scottish Rite, the Masons, and was honored this year for 50 years as a member of The Shriners Aboud Ben Adhem chapter. Bill passed away at his home December 18, 2016 at the age of eighty-one years. Bill will be sadly missed, but lovingly remembered by his wife Hettie of the home, his daughter Laurie George-Baird and son-in-law Dan Baird of Nashville, Tennessee, daughter Tina Houston and son-in-law Michael Houston of Warrenton, Missouri, son Shawn Becker of Salem, Missouri, his brother Larry George and wife CJ of Norman, Oklahoma, his sisters-in-law Peggy George of Justin, Texas and Vivian George of Joplin, Missouri, his brother-in-law Carl Martin and wife Dana of Foristell, Missouri, grandchildren Carla, John and Kenneth, great granddaughter Nevaeh, several nieces and nephews, and so many friends. Bill was preceded in death by his brothers Dale George of Waynesville, Missouri and Raymond Junior George of Joplin, Missouri, brother-in-law Jimmy Martin of Wright City, Missouri, in laws Reba and Virgil Martin of Dixon and lost his son Michael George in May of this year. Services were held at 1:00 p.m. Thursday, December 22, 2016 in the Memorial Chapels and Crematory of Waynesville / St. Robert with Rev. Danny Graves officiating. Rev. Graves also sang “The Middle Man”, soloist Becky Lercher sang “It Is Well With My Soul” and a video by BYU Noteworthy of the song “Amazing Grace, My Chains Are Gone” was played. Serving as escorts were Brody Helton, Bronson Helton, Jeff King, Rodney King, Layne Lercher and Brock Lercher. Serving as honorary escorts were Terry and Steve Helton, Leonard and Carole King, Larry and Karolyn Lercher, Vic and Tom Lynch, Bob Dodds, Dwight Hensley, Kenny Foster, Doug Long, Norman Anderson and Kenneth “Frog” Long. Burial with military honors followed in the Waynesville Memorial Park Cemetery of Waynesville. Military honors were provided by the Missouri Honors Team. Services were under the direction of Memorial Chapels and Crematory of Waynesville / St. Robert. Memorial contributions may be made in memory of Bill George to the Shriner’s Children’s Hospital of St. Louis, Missouri and may be left at the funeral home.

The family of Bill L. George created this Life Tributes page to make it easy to share your memories.