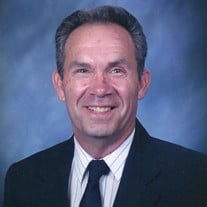 William “Bill” Henry Karr, son of James and Idolia (Smith) Karr, was born on July 23, 1946, in Iberia, Mo. Bill was one of 12 children and grew up making memories he would tell generations later. While on the job as a school bus driver in 1969, Bill met Kathy Carroll as she would meet her younger sisters at the bus stop. Bill and Kathy quickly realized their union was meant to be and married on June 1, 1969, in Swedeborg, Mo. Through their 48 years of marriage, Bill and Kathy resided in in the Richland area and started a family of their own with two sons, Kevin and Mark. Bill enjoyed the love of family as it grew with seven grandchildren: Cole, Cale, Layton, Lane, Madison, Zoe and Darcy, among whom he was known in his latter years as “Gumpy”. Bill worked hard throughout his life to help support and provide for his family. He was a police officer, and later a reserve officer, in the City of Richland for 17 years. Following his time in law enforcement, he worked for Electrovert for 27 years and traveled the world to repair electronic machines. He continued in this line of work for Metaltech prior to his retirement. Bill gave back to his community, volunteering with Good Samaritan of the Ozarks and the Pulaski County Sheltered Workshop in his retirement years. He was also a long-time member of the Masonic Lodge in Macks Creek. Bill gave his life to The Lord at a young age and was a member of The First Baptist Church. Bill loved his family more than anything. A day never passed when his compassion and commitment was questioned. He was always there for Kathy, his sons and their wives, his grandchildren and many more of his family and friends. Bill played Santa for over 30 years of Christmas gatherings with the Carroll Family. He was always giving a helping hand, and was able to fix anything – from small to large and more. Bill’s sense of humor was one of his own and always brought smiles to those in his company. He was a very honest, straightforward, “call-it-like-it-is” man whose wisdom was sought and respected by many. Throughout the difficult times, Bill never lost his faith in Jesus. He assured his family he was prepared to leave this walk of life and was a “winner either way.” This was a central piece of Bill’s life, and he always encouraged other to know the Lord as well. Bill died in his home near Richland, in the presence of his beloved family on September 14, 2017, at the age of 71 years, one month and 22 days. Although his passing brought sadness to loved ones, it also brought happiness knowing Bill walks freely in Heaven. His memory will live in the hearts of his family and friends. Bill is preceded in death by his parents, siblings: Doris Newton, Sarah Dixon, David Simmons, Janet Wallace, Bob Karr and Joann Pasierb; his father and mother-in-law Willis and Argie Carroll; brother-in-law’s: Sonny and Bob Carroll. Bill is survived by his loving wife, Kathy of the home; two sons: Kevin Karr (Lacie) and Mark Karr (Carrie) all of Richland, Mo.; 7 grandchildren: Cole Karr, Cale Karr, Layton Karr, Lane Karr, Madison and Zoe Decker and Darcy Karr; siblings: Nancy Lopez (Frank), Tom Karr (Jean) of Killeen, Tx., Randy Woodcox (Barb) of Joaquin, Tx., Michael Woodcox (Geraldine), Becky Keenen (Barry) of Waco, Tx., brother’s and sister-in-law’s: Gail Parten (Frog), Karen Davis (Jim) both of Lebanon, Mo., Donnie Carroll of Camden OH, Roger Carroll, Wilene Rowden (Zane) and Shirley Zeigenbein all of Richland, Mo and Judy Gray (Freddy) of Waynesville, Mo, numerous nieces, nephews, other relatives and friends. Bill also leaves behind his good buddy, “Little Dog”. Services were held at 11:00 A.M., Monday, September 18, 2017 in the Memorial Chapel of Richland with Pastor Bob Lilly officiating. Mark, Cole, Cale and Lane all shared fond memories. Some of Bill’s favorite music selections played included, “I Saw the Light”, “Go Rest High”, “May the Good Lord Bless and Keep You”, “Amazing Grace” and “I Want to Stroll over Heaven with You.” Serving as escorts were Cole, Cale, Mark, Lane and Layton Karr, Roger Carroll, Rick Kelley and Jim Davis. Honorary escorts were Trent Zeigenbein, Eric Oursbourn, Mike Clopp, Billy Willoughby, Rick Carroll, Joe Roofener and Dick Larid. Burial followed in the Oaklawn Cemetery of Richland. Services were entrusted to Memorial Chapel of Richland. Memorial contributions may be made in memory of Bill Karr and may be left at the Memorial Chapel of Richland. Online condolences may be left at www.memorialchapelsandcrematory.com

William &#8220;Bill&#8221; Henry Karr, son of James and Idolia (Smith) Karr, was born on July 23, 1946, in Iberia, Mo. Bill was one of 12 children and grew up making memories he would tell generations later. While on the job as a school bus... View Obituary & Service Information

The family of Bill Karr created this Life Tributes page to make it easy to share your memories.